Legendary Commentator Peter Allis Dies Age 89: The veteran golf commentator has passed away after almost 17 years working at the BBC

Tributes have come pouring in all over the world for Peter Allis, the iconic golf commentator who has sadly passed. Allis became a legendary figure to all those who played golf through his hilarious commentary over the years.

The English man branched into the BBC after having a successful playing career. He turned pro in 1947 and has won more than twenty tournaments and played on eight Ryder Cup teams.

His biggest on tour win was the British PGA Championship which he won three times. These victories coming in 1957,62 and 65. His best major finishes came at the Open Championship, finishing in the top ten five times.

His best chance of winning a major came at the Open in 1954 just four shots from the leader. Allis played on eight Ryder Cup teams from 1953 to 1969, back when it was Great Britain against the USA.

The Englishman compiled an impressive record of ten wins, five draws, and five defeats for a total of twelve and a half points.

Allis had played mostly in Europe, qualifying for the Master’s twice but never a US Open or PGA Championship. He finished his playing career in 1978 where he first began working with the BBC. 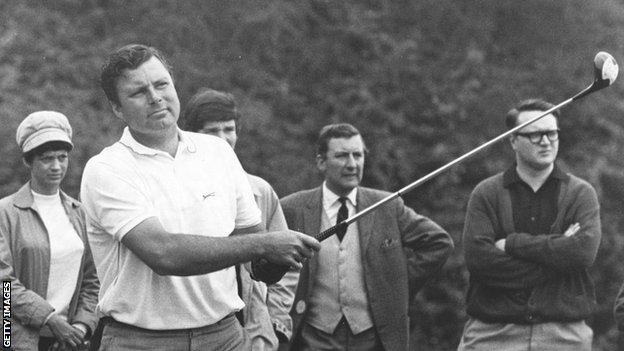 Allis passed away aged 89 at his home in England. His family issued a statement saying:

“Peter was a devoted husband, father and grandfather and his family ask for privacy at this difficult time,” the family wrote, according to the BBC”.

Condolences for the famous sportsman have come from far and wide from many areas of the world. Eighteen-time major champion Jack Nicolaus and former England footballer Gary Lineker all gave their best wishes.

Sad to learn that golf lost one of its great players, broadcasters, writers, ambassadors and, most important, one of the game’s true friends, with the unexpected passing of Peter Alliss.

Peter was a dear friend to Barbara and me for probably over 60 years. pic.twitter.com/tKONryKjV2

Deeply saddened to hear that Peter Alliss has passed away. A wonderfully witty and truly brilliant commentator. Golf will never be the same. #RIPPeter

Legendary BBC golf commentator and former golfer, Peter Alliss has died at the age of 89.

Known as the 'the voice of golf', he has been synonymous with the BBC's golf coverage for more than half a century.

Our thoughts go to his family and friends at this sad time.

The English commentator has had some of the funniest and at times controversial quotes and phrases. Here is a little taster of Allis comedic style in some of his best moments.

“What on earth are you doing? He’s gone ga-ga. To attempt to hit the ball out of there is pure madness.” – about Jean van de Veldes disaster on the last hole at the 1999 Open

“It would be very easy to drool with sentimentality over the Ryder Cup. But, at the end of the day, it is simply two teams trying to knock seven bells out of each other, in the nicest possible way.”

“Look at that. Faldo looks a young man again, and poor old Greg, well he looks ready for his bus pass.” – On Faldo vs. Norman at the 1996 Masters

“There aren’t many good sixes, but that was a bad six.” – Watching Tiger Woods at the Master’s

see below Alliss’s hilarious commentary as Nick Faldo and his caddy try to move the crowds back.

Read our other articles on everything Golf, keeping you up to date at Sports News Ireland.