The red devils clashed with old rivals Leeds United at Old Trafford yesterday evening. This was a highly anticipated match for fans as both sides hadn’t met in fixture since 2004. This game was an important opportunity for Utd to break into the top four.

Sitting in sixth position, with two games at hand, could put them in sole second if results go their way. Oles men needed to start this game with intensity from the first whistle. In games past such as against Sheffield, RB Leipzig, and Man City they were criticised for starting games too slowly.

Leeds on the other hand have taken the league by storm with their high pressing all-out attacking style. They sit in fourteenth on seventeen points far better than their fellow promoted counterparts West Brom and Fulham.

Manager Beilesa has pulled off some big results this season most notably the draw with City and a narrow Liverpool defeat. A win at Old Trafford could see them to tied tenth with Wolves on twenty points.

The game began with high pressing and intensity from both sides. Viewers were stunned in just the second minute as Utd split Leeds open with ease to score. A break in midfield saw Fernandes dribble around the opposition box, laying a ball across for McTominay.

The Scot came charging in and rifled the ball into the bottom corner. Leeds keeper Messlier didn’t move an inch. The United charge didn’t stop here however, as in the third minute, they were back on Leeds.

Another breakaway saw Martial cut inside and flick a ball through two defenders. McTominay again burst past the defenders to place the ball in the bottom corner for two-nil. Leeds was in desperate need of a response and the seventh minute was nearly just that.

A counter for Leeds had Bamford one v one with DeGea, only to fluff the ball miles wide. After some back and forth countering from both sides, Leeds thought they had finally had a breakthrough.

A deflected Rodrigo shot from outside the box looped over Maguire and Lindelöf. The ball fell to Bamford, who volleyed the ball into the back of the net but was quickly ruled offside. United continued growing in confidence as on the twenty-minute mark, they scored again.

A Martial deflected shot inside the box by defender Ayling ricocheted the ball straight to Fernandes. The Portuguese midfielder drilled the ball low and hard past the Leeds keeper to make it three.

Just sixteen minutes later, Utd made it four from a Luke Shaw corner. Martials flicked on header found defender Lindelöf total unmarked at the back post who tapped in with ease. Pundits criticised defender Stuart Dallas for poor marking after completely losing the Swede.

Bielsa’s team finally got on the scoresheet in the forty-first minute. A curling corner met the head of captain Liam Cooper who headed home off the post. DeGea scrambled across but couldn’t reach the shot. Cooper gave the team belief for a possible fight back. 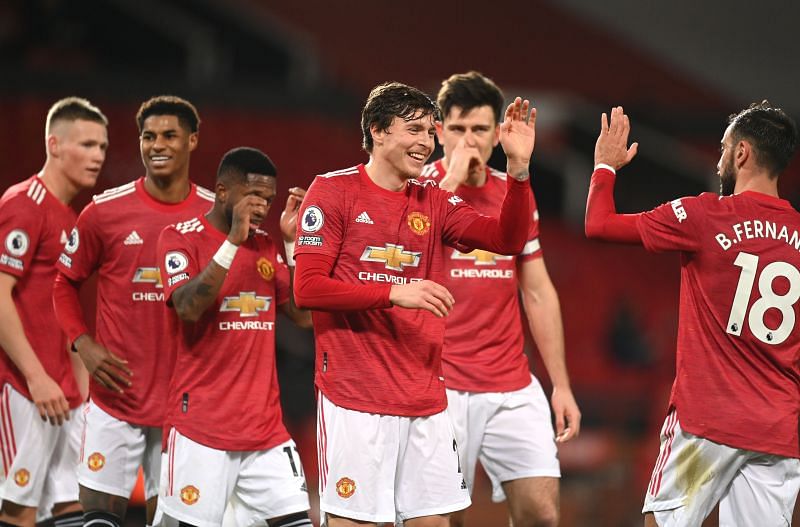 Right in the first minute of the second half, United continued where they left off with high intensity. On forty-six minutes, they should have made it five. Fernandes on the break plays in a wonderful pass into the box for Martial.

The Frenchman cuts across wrong-footing both defender and keeper and bends the ball towards the corner, missing by inches. However, Leeds continued to fight on with a never say die attitude, a trademark Bielsa team trait.

On the forty-ninth minute, they nearly had their second. Rodrigo bent the ball into the back post for winger Raphinia. His volley is catapulted toward goal, only for DeGea to pull off a fantastic cat-like reflex save.

The game continued its high intensity. Both teams snuffed out each other’s attacks with last-ditch tackles and good defending. The sixty-fifth minute saw that deadlock end. McTominay burst through Leeds midfield, laying off for Daniel James.

The Welshman flicks the ball away from the defenders and burst through on goal. James shot as the ball fizzed along the ground through the keeper’s legs to make it five. Just two minutes later, United made it six.

A needless challenge by a Leeds defender brings down Martial for a penalty. Fernandes steps us with his trademark hop and scores to gives the red devils their sixth. 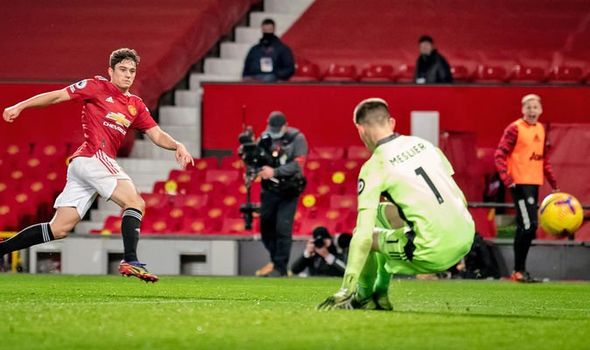 Just minutes later, it should have been seven. Once again, Scott McTominay in a man of the match display, rips through a tired Leeds midfield. His pass unlocks the Leeds backline, and Martial is one v one with Meslier. The six-foot-six keep dives the wrong way, but his long dangling leg denies a goal.

Leeds struggled to gain momentum in the second half as Utd appeared to create a goalscoring chance with every attack. The seventy third minute saw Stuart Dallas give Leeds an outstanding goal, but it was nothing more than consolation.

Some incredible tight control outside the box and a quick feint gave him the opportunity to shoot. His shot bent right in the top corner, leaving the keeper zero chances of saving it.

Solkjaear Happy With His Side

The match ended in a six one victory for Manchester United. The win moves them up to third place, just one point off second with a game at hand. McTominay was undoubtedly the man of the match for his outstanding performance.

His phenomenal work rate, two goals, and an assist were testament to a much-improved United performance. Speaking after the game, the manager said:

“It could have been 12-4. It was that kind of game. That was fantastic from the first minute – we had a plan to get after them, go forwards when we had the ball, and Scott McTominay got two goals in the first three minutes.

“We found a way of getting them going – just imagine if there were 75,000 people in, it would have gone down in history as one of the great performances against Leeds”.

For Bielsa and his Leeds side it was a humiliating defeat. They did create some chances that could have been scored but were caught on the break far too often. The sheer pace of United attack was something they couldn’t handle.

This defeat keeps Leeds in fourteenth position in a tie with Arsenal. Speaking after the match, Bielsa gave his view:

“They would transition from defence to attack.

“Our return was slower than their transition and this was linked to the fact that we couldn’t finish our attacks and our return was not at the speed needed.”