Rory Mcilroy tasted defeat today in his first game at the Dell Matchplay against fellow European Ian Poulter. Poulter despite being the lowest ranked in the group and in the event, can’t be underestimated.

The 45 year old is of legendary status amongst golf fans for his Ryder Cup matchplay heroics time and time again. The Englishman dispatched Mcilroy 5 up with 6 to play after some magnificent golf.

Issues with Mcilroy’s driving and putting hampered him all day as he starts his group in last place on zero points. The postman took the first hole with a birdie after hitting an approach shot to ten feet.

Mcilroy failed to convert his long birdie effort after his drive found the fairway bunker. He then handed Poulter the par 3 fourth after a bad three putt to go two down. Matters got worse for Mcilroy on the next hole as he pulled his drive out of bounds.

His ball struck the car path and bounced out of play into a nearby residents swimming pool. Poulter then stuck his greenside chip to gimme range to make it three.

Suddenly it looked as a comeback would be on as Rory birdied holes 6 and 8 with some excellent approaches.

However, he simply couldn’t compete with the Englishman who was on fire to birdie holes 9,10, and 11. It was last chance saloon as Mcilroy needed a strong finish from 12 onwards.  Poulter didn’t give him that chance after hitting the shot of the day on the par 5 12th.

The Englishman stuck an iron shot to the flag from 266 yards for eagle. Mcilroy conceded the hole after a forced 3 wood missed the green wide right into the wild grass. The match was wrapped up on 13 after Rory’s greenside chip ran past the flag and down into the water.

He went on to make bogey with Poulter making a clutch par save. The match finished 5&6 as the four time major winner needs to regroup into the next match. Speaking after the win Poulter spoke to the media.

“I’m not sure it was easy, to be honest. I mean, you’re playing Rory and it was apparent when you’re one up after being three up that this is not going to be an easy match.

But I wanted to keep the foot down because it’s too easy to let him get back in the game like he did and then he takes control of the match. 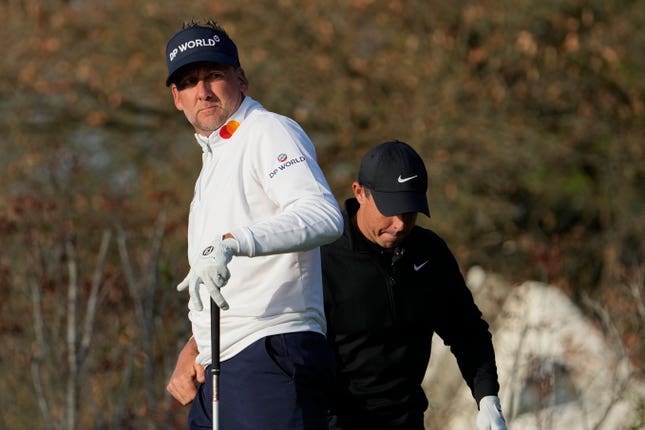