Outrage over new proposed European Super League: Fans, critics and associations have voiced their opinions on the new Super League.

Europe’s elite clubs will take part in a whole new league similar to that of the Champions League. The format is as follows. Two groups of ten teams will play each other home and away with the top three teams progressing.

They will move onto a knockout phase of a quarter final, semi final and final. While most clubs owners love this idea to milk as much money as humanly possible others do not. The initial idea was teams would play in this Super League instead of the Champions League.

As a result, clubs would continue to play domestically followed by super league mid week games. UEFA and FIFA have tried to stamp out this idea by implementing sanctions for participating in the league.

Players won’t be allowed play for their countries and teams must break away completely from their domestic leagues. This has caused outrage amongst fans especially Premier League supporters.

With all the clubs so steeped in the traditions of football, knowing the proposed sanctions and to sign on anyway. This would see United, City, Liverpool, Arsenal, Chelsea and Spurs out of next seasons premier league.

However, some historic footballing giants, like Borussia Dortmund, PSG and Bayern Munich have rejected to join. They acknowledge the fans and have refused to leave their respective German and French domestic competitions.

Many critics and pundits since the announcement have piled hate onto the Premier League sides. Roy Keane, Gary Neville, Rio Ferdinand, and many more have labelled the sides as “Greed” fuelled and a “Disgrace”.

However, Real Madrid’s president Florentino Pérez has been named the Super Leagues first chairman. He has claimed that the league is in response to fans and their entrainment demands.

“Football is the only global sport in the world with more than four billion fans and our responsibility as big clubs is to respond to their desires.”

Meanwhile FIFA and UEFA and all the participating teams domestic league associations are united in stopping the super league. They issued a joint statement voicing their stance on the proposed league.

“If this were to happen, we wish to reiterate that we – UEFA, the English FA, RFEF, FIGC, the Premier League, LaLiga, Lega Serie A, but also FIFA and all our member associations. We will remain united in our efforts to stop this cynical project.

A project that is founded on the self-interest of a few clubs at a time when society needs solidarity more than ever.

This Super league comes at the worst possible time for fans of the sport with the ongoing covid pandemic. Fans have been deprived with restrictions of seeing their clubs in action only to now move to a new league. 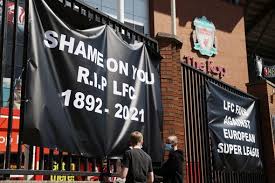 Many Factors on the Table: Will Messi Extend His Contract With Barcelona?

Kerry cruise to a 22 point rout of Galway in league...

Kerry cruise to a 22 point rout of Galway in league...