Can Bryson drive his way to victory at the Players? With an absurdly big drive how well can DeChambeau channel that to potentially win this week.

Bryson DeChambeau comes into this week at the Players Championship as one of the red hot favourites. The 27 year old comes straight from his record breaking win at the Arnold Palmer, edging Lee Westwood by one shot.

He has been nicknamed “the scientist” for his constant tinkering and testing of swing psychics and mechanics. The World number 5 frequently likes to bully each course he plays by simply outdriving it.

But can he bully TPC Sawgrass?. This question has arisen after last week’s win at Bay Hill. The 27 year old hit the longest drive ever seen before on the par 5 sixth hole. His whopping drive of over 377 yards over water left him short of the green after one shot.

How will Sawgrass respond?

With Sawgrass next on the scientist’s hit list the PGA Tour have already devised a plan to stop him. Below is one 18th at the Players, of the toughest closing holes in golf with its narrow fairway and its tight water hazard.

However, DeChambeau usually likes to play the hole differently from others, as shown by the left hand tracer. 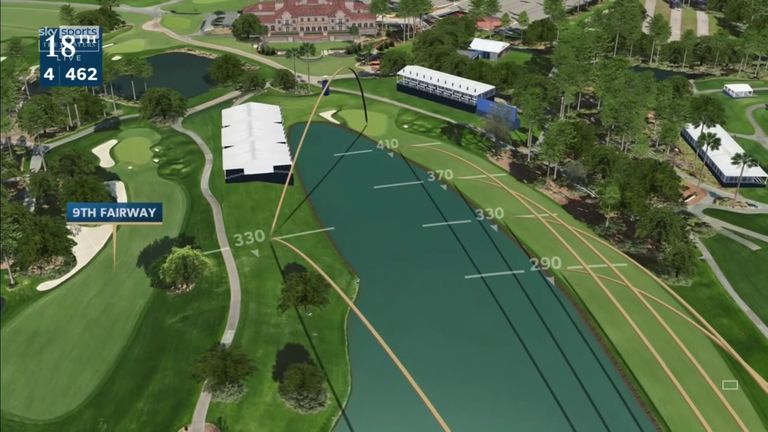 This gives him an area to bomb his drive without fear of the hazard, leaving a shorter second shot in. So much so the PGA Tour issued a new ruling this week commentators have dubbed the “Bryson rule”.

The ruling now sees DeChambeaus’ landing area marked as out of bounds for the 18th hole. The PGA Tour has decided to take action after his record breaking drive at the Arnold Palmer last week.

This new rule is an attempt to stop the American’s long range game, but will it be successful?. We will have to wait and see as Rory Mcilroy looks to defend his title tomorrow at the Players’ Championship.