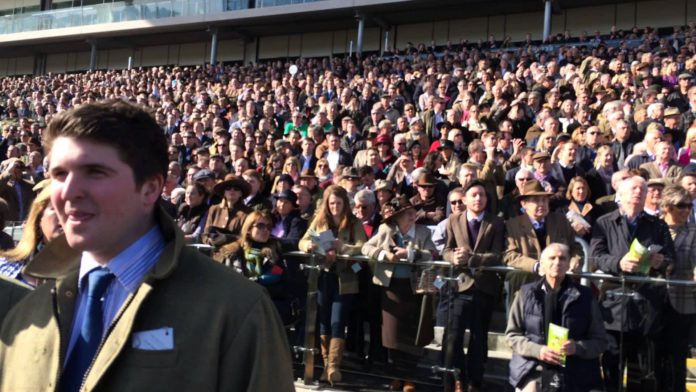 Record ticket sales have resulted in all general admission enclosures for Gold Cup Day at the Cheltenham Festival selling out before the end of January for the first time ever, organisers The Jockey Club announced today.

There has also been a surge in private individuals buying hospitality packages, with some remaining on sale for the most prestigious raceday in the Jump racing calendar – taking place this year on Friday 18th March.

Tickets for the other three days of The Festival are still available but also selling quickly, with the number of general admission tickets already sold for the four days up 37% compared to the same period in 2019.

There has also been unprecedented demand for tickets for Randox Grand National Day at Aintree, with only tickets for The Embankment – the area beyond the Melling Road – and hospitality packages now available for the world’s greatest steeplechase on Saturday 9th April. General admission, including grandstand badges, and hospitality packages are also still available for the first two days of the Randox Grand National Festival (April 7th and 8th).

Overall general admission ticket sales for the three days of the Randox Grand National Festival are up 19% on those sold by the end of January in 2019, the last time the event was staged with a crowd.

The sales figures are a further boost to The Jockey Club, which has also announced that general admission ticket sales at its fixtures between August 1st and December 31st in 2021 increased by 7% when compared with like-for-like figures in the pre-pandemic year of 2019.

The Cheltenham Festival took place behind closed doors last year due to COVID-19 protocols put in place at the time, while only slightly relaxed measures for the 2021 Randox Grand National Festival less than a month later resulted in a restricted number of racehorse owners being allowed to attend but racegoers missing out.

With the 2020 Randox Grand National Festival being cancelled completely due to the pandemic, this April will be the first time the three day Aintree spectacular has been staged in front of a crowd since 2019.

He explained: “The Boodles Cheltenham Gold Cup and the Randox Grand National are two of the biggest sporting events in the calendar, so we’re delighted that they will once again take place in front of proper crowds.

“As an organisation which reinvests all its profits back into the sport under our Royal Charter commitment, this news is not only a huge boost to The Jockey Club – it’s massive for horseracing as an industry.

“We know that the past two years have been a time of real uncertainty for everyone, so it’s fantastic to see people’s eagerness to get back to our racecourses and their confidence to book tickets for our events months in advance returning.

Due to the pandemic all sport in the UK was suspended from March 17th 2020 but horseracing became one of the first to return behind closed doors two and a half months later, on June 1st. It was not until December 2020 and after successful pilot events had taken place that spectators were allowed back on British racecourses and even then only in limited numbers.

However, a surge in COVID-19 cases quickly resulted in racing, like all other sports, being forced to go ahead behind closed doors and only in May 2021 were racegoers allowed to attend, again in restricted numbers.

These limits were only lifted completely on July 19th last year and Truesdale added: “The British public have shown incredible patience and resilience over the past two years, especially while ever-changing restrictions have impacted our daily lives and determined what we can and can’t do.

“As restrictions have continued to ease and people look to spend their leisure time doing things they were prevented from doing during lockdown, we’ve seen a really positive increase in attendances on our racedays. This isn’t just at one or two of our bigger fixtures towards the end of 2021 but at so many of our racedays, with general admission ticket sales up 7% in the last five months of last year compared with the same period in 2019.

“As the second most attended sport in the UK we provide millions of people with fantastic, thrilling and unique days out and my own personal hope is that we can now encourage even more people to join us to see for themselves how much our sport has to offer.”

As well as the Cheltenham Festival in March and the Randox Grand National Festival in April, The Jockey Club is scheduled to stage more than 330 fixtures in 2022 at its 15 racecourses, including a three-day QIPCO Guineas Festival at Newmarket between April 29th and May 1st and the Cazoo Derby Festival on June 3rd and 4th, which is part of Her Majesty The Queen’s official Platinum Jubilee celebrations.

In December last year it was announced that prize money at The Jockey Club’s 15 racecourses is set to exceed £58 million for the first time ever in 2022, representing an increase of more than £12 million on forecast levels for 2021 and nearly £5 million more than pre-pandemic levels in 2019.