Tottenham v Leicester City Preview: This is a big test for both sides as they will be looking to bounce back from blips in form.

On Sunday, Spur’s welcome Leicester City to the Tottenham Hotspur stadium. This game marks the 114th meeting between the two sides, with Tottenham winning the majority.

Spurs will be bitterly disappointed after their last match against Liverpool, conceding from a last-minute corner. A draw would have kept them in a tie for top spot with the Reds, and now are three points adrift.

Jose Mourinho will be the most frustrated, given their excellent performance up to that point. His team has become far more solid at the back compared to the side they were in season’s past.

However, to then concede a last-minute goal from a Firmino corner will have gutted Spurs. This especially given they had the record for least goals conceded from corners in the league.

They are eager to prove that they are still in the hunt and will not capitulate under pressure.

Spurs currently sit in second position, just three points off top spot on twenty-five points. The foxes are creeping up behind them as they lie just one point back in third place.

Thus far in the league, Tottenham has won seven, drawn four, and lost two from thirteen games. Defeat for Jose’s men could see them drop down to as far as eighth with others having games at hand.

A win for the London side would see them staying in touch with Liverpool, keeping title aspirations alive. Despite their deflation after the last game, Spur’s will be confident in their style of play to overcome the foxes.

Their “park the bus” Mourinho style is viewed as stone age to some but is highly effective against modern systems.

They have gradually moved away from Pochettino’s expansive system of possession-based football, becoming more defensive.

Spur’s sitting back and hitting on the counterattack has seen them overcome big teams they usually struggle against. Kane and Son have been a massive part of this system as they continue to rake up goals and assists.

Striker Harry Kane has so far scored nine goals and totted up an impressive ten assists. Forward partner Son has assisted four and scored eleven goals most recently in their last game against London rivals Arsenal.

Tottenham enter this week with one player on their injury list. English defender Tanganga remains out for the rest of 2020 the manager confirmed in a recent interview.

The defender will be out for the next three weeks with a shoulder problem sustained mid-week in the Europa League. Mourinho will have some key players back in training this week after some absences.

Gareth Bale will be a welcome addition to this week’s squad after missing out against Place and Liverpool. Mourinho has confirmed this was down to illness as the Welshman returned to training with the team this week.

Argentine midfielder Eric Lamella returns to training, having been out since November with an achilles problem. However, he will not be fit enough to make the squad this weekend and unlikely to play any part. The foxes currently sit in third position on twenty-four points. A win here could see Brendan Rogers men leapfrog Tottenham into second place. Defeat on Sunday could see them drop as far as tenth position.

That a possibility with the sheer number of top ten teams with games at hand. They’ve currently won eight, drawn none, and lost five out of thirteen games. A win is vital for both sides to avoid a freefall down the table.

Leicester will be looking to rain on Mourinho’s parade and pull off a win as they go into the game the underdogs. Rogers and his Leicester side enter this game off the back of a disappointing defeat against Everton midweek.

Goals from Richarlison and Holgate halted their three-game unbeaten run. Brendan Rogers will know his side are in for a tough game against a strong Spur’s side.

The Foxes are overall in a good run of form this season as they chase top four. However, their main criticism comes as they tend to start seasons well and inevitably slump after Christmas.

As a result, they went on a nine-game winless run and really struggled. The temporary stop did not help matters to the season with the ongoing COVID pandemic.

This inability to cope with a mixture of bad luck and injuries saw them slump from third to fifth place. Rogers could only hail his team as they still achieved European football in the Europa League.

However, this season if they are to challenge for top four, they need to improve defensively. Recent defeats to out of form Everton and a relegation battling Fulham are what needs to be avoided.

Under Rogers, the team has become more expansive in attack and looks to keep possession. At this moment in time, Tottenham may be the wrong team for them to play after a defeat.

If Rogers wants his team to dominate the ball against Spur’s, it will play into Mourinho’s hands. Tottenham sitting so deep will be the perfect opportunity to play to their strengths on the counter.

Rogers will need to adapt his team and perhaps beat Spur’s at their own game.

Thankfully for Rogers and his side, key players are returning from injury and suspension at just the right time.

Defender Johnny Evans returns for selection after being suspended after receiving his fifth yellow of the season against Everton.

Belgian full-back Castagne too will return after being out for eight weeks with a hamstring issue. The left-back has been huge for the foxes this season as he’s filled the void left by Ben Chilwell.

Chilwell left the club over the summer window to Lampard’s Chelsea for an estimated fifty million pounds.

Meanwhile, Daniel Amartey may also see a return this week, having been sidelined since October with a hamstring problem.

Big-name defenders Pereira and Soyuncu are still injured and said to be out for several weeks. I predict a tightly contested affair. Both teams are extremely hard working and determined, which will make for an entertaining physical battle. Each team’s manager is extremely detailed in their analysis and are very thorough.

As a result, I expect minimal opportunities for both sides as they will be so well drilled defensively. Spurs will look to play a 4-2-3-1 formation.

This gives them a solid base to build from but doesn’t leave them open to counter attacks. They will sit deep and look to use the pace of Son and Bergwijn on the break to create chances.

Kane will drop deep into pockets of space in midfield and will build on his assists tally this season. Leicester will look to play a 5-4-1, with high wing-backs looking to create most of the chances.

This has been a system that Rogers has found works best given his current squad. Castagne and Pereira are a testament to this with their high work rates and lightning pace.

Once given the ball on the counter-attacks, threats of Maddison and Vardy will look to do the most damage. This formation allows them to defend in numbers but also get up the pitch quickly in attack.

I see this game being won by the team that can counter the best. Given how well drilled each side will be on the opposition threats, chances will be minimal.

However, given their position, Tottenham has been in the better form defensively and are breaking records scoring goals in attack. Their depth of squad and quality far outweighs what Leicester has to offer, especially off the bench.

I see Spur’s quality simply being too much a predict a hard-fought one-nil victory. 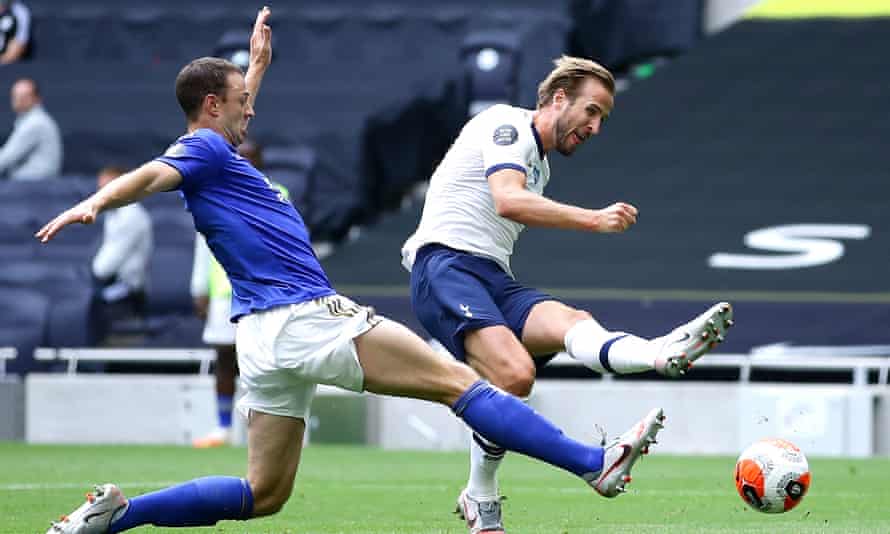