6 Reasons Why Stephen Kenny Still Has Time as many calls for the head of the Ireland manager after the winless run.

Stephen Kenny entered his eighth game in charge on Wednesday against Bulgaria at the Aviva. Thus far many critics and fans have been disappointed at his very slow start to his Ireland tenure.

Ireland have already broken their record for the longest goal drought of any Irish side. This stating that Ireland haven’t put the ball in the back of the net for over 11 hours of football. This goal scoring drought has been the worst for its been for 24 years.

With David McGoldrick retired, Shane Duffy is our top scorer with one goal. Having drawn against Bulgaria and no goal being scored questions are starting to be asked. With the World Cup qualification in March people will begin to wonder if Kenny’s right for the job.

Here are six reasons Kenny still has time on his side.

The first and main reason Kenny has more time on his side is due to Covid 19. Many Covid related incidents have severely crippled Kenny’s squad selection process over the last few camps.

Stephen Kenny has not had a full squad at his disposal since his first game in charge back in September. With his ideal starting eleven picked it was clear how we wanted to play. The manager’s preferred players were all on the pitch and signs were positive.

However, since that game against Bulgaria in Sofia, player availability has gotten worse each camp. The first bad signs were in the Euro 2020 playoff against Slovakia. On the flight to the game Connolly and Idah contracted Covid having been close contacts.

This occurring because the Irish players had to be separated on a commercial flight in accordance with Irish Covid rules. In an attempt to rectify the players contracting covid in the next camp, the FAI eliminated travel.

With Ireland facing Wales on a Sunday they needed a game mid week close by. A  friendly against England resulted which suited both parties after New Zealand pulled out on the English.

This would mean the players based in England could play in London and then travel individually to Wales afterwards. In theory this would help minimise the risk of any close contacts.

Unfortunately, despite limiting the risk of contracting covid, more players got it. Five players contracted the virus, taking out key players such as Connolly, Robinson, Doherty, McClean and Browne.

With missing players growing from bad to worse Kenny’s third reason for more time has been injuries to his side. Whilst Kenny has been attempting to deal with absentees, players one by one became injured.

Important players such as Egan, Stevens, Idah, O’Dowda, McCarthy, Coleman, Arter were all ruled out. After the Wales game, Hendrick and Molumby were ruled out against Bulgaria due to suspensions.

Kenny faced a total of 14 missing players. Most of his first team and part of his bench were missing. Ireland had to rely on substitutes and reserves in an attempt to win against the Bulgarians in Dublin.

For this main reason of missing players to Covid, injury or suspension Kenny cannot be judged on these games. No board or association could expect any team to succeed at any level missing more than half their squad.

The managers true judgment as Ireland manager can only come when he has a full squad available to him. The fourth reason why Kenny deserves more time is purely that there’s a noticeable difference in how Ireland are playing. Previous managers of Trapattoni, O’Neil and McCarthy were accused of never playing football.

Trap and O’Neil ignored these statements whilst McCarthy had a mixture of the long ball and passing. Despite this, these managers never really needed time to impose their philosophy’s.

Both coaches played rather similarly so the players didn’t need much time to adapt. However, with Kenny he’s trying to shake off the age old Ireland stigma of “We Don’t Have The Players”.

His philosophy of passing the ball and getting the midfielders to dictate the play will take time. The change of formation from our previous defensive formations to a Liverpool 4-3-3 will need time.

Unfortunately, between injuries, covid and suspensions he hasn’t been able to test this with his preferred eleven.

However in the rare instances he has, many positives can be seen.

The fifth reason Kenny deserves more time is that Ireland are clearly playing a new style and improving. In the away games against Bulgaria, Finland and Slovakia his identity is clear when players are available.

Gone are the days when Ireland will sit deep and park the bus and attempt to nab a goal. The long ball tactics will be replaced with more fluid possession based football in a 4-3-3 formation.

The front players look to press out of possession. The striker will look to receive the ball and bring the wingers and midfield into play.

Midfielders will look to make rotational runs and offer for every ball. They will look to be brave in possession and make confident passes and take risks.

The defenders will look to spread out and pass patiently around the back, finding openings in midfield. Centre backs will look to step into midfield to cause an overload, creating space for others to run into to.

When Ireland have been able to play this game, they’ve been extremely creative, showing good passages of play. The problem has been once in the final third and a chance is presented, we lack confidence to take it.

The fact that Ireland are playing so well but seem to now concede sloppy goals appears to make heads drop. However, this will all take time. If Kenny had a full squad available to him and was winless from eight games questions would be asked.

At the moment he’s doing well to just not lose games with the players he has constantly chopping and changing.

Consistency is key for Ireland moving forward and with more options available they’ll turn things around.

The FAI Back Him

The fifth reason why Kenny has time on his side is because the FAI support him. It is hard to go back to find an Ireland manager that was announced so early on and backed fully. In 2018 pending the sacking of O’Neil, Ireland were in need of a new manager.

The FAI found themselves in a spot of bother. Euro 2020 was around the corner, with Dublin a host nation, we desperately needed to qualify. A strange deal resulted. Mick McCarthy would take over for the Euro qualifying campaign and once the Euro’s were over Kenny would step in.

In the mean time Stephen Kenny would implement his ideas in practice as U21s manager. The idea appeared to be McCarthy would be a quick fix whilst Kenny would build for the future. For McCarthy the deal appeared odd.

A manager would take a job knowing that regardless of what he does in a year, he’s out. The FAI knew the type of manager Kenny was after his domestic and European success at Dundalk.

They saw how he took a club of average players and coached them to compete against Europe’s best. This accompanied with a long period of domination of four league titles and two FAI Cups.

His style of possession based football attracted the attention of many fans that believed he could change the Irish team.

Since taking the job the FAI have given him a period of grace to guide the squad through a transition period. The FAI will know his ideas will take time and given current circumstances it’s difficult to judge the results.

Kenny will no doubt see out his contract till after the World Cup qualifiers.

However, the FAI may back track on Kenny’s future if Ireland find themselves watching another tournament from home. 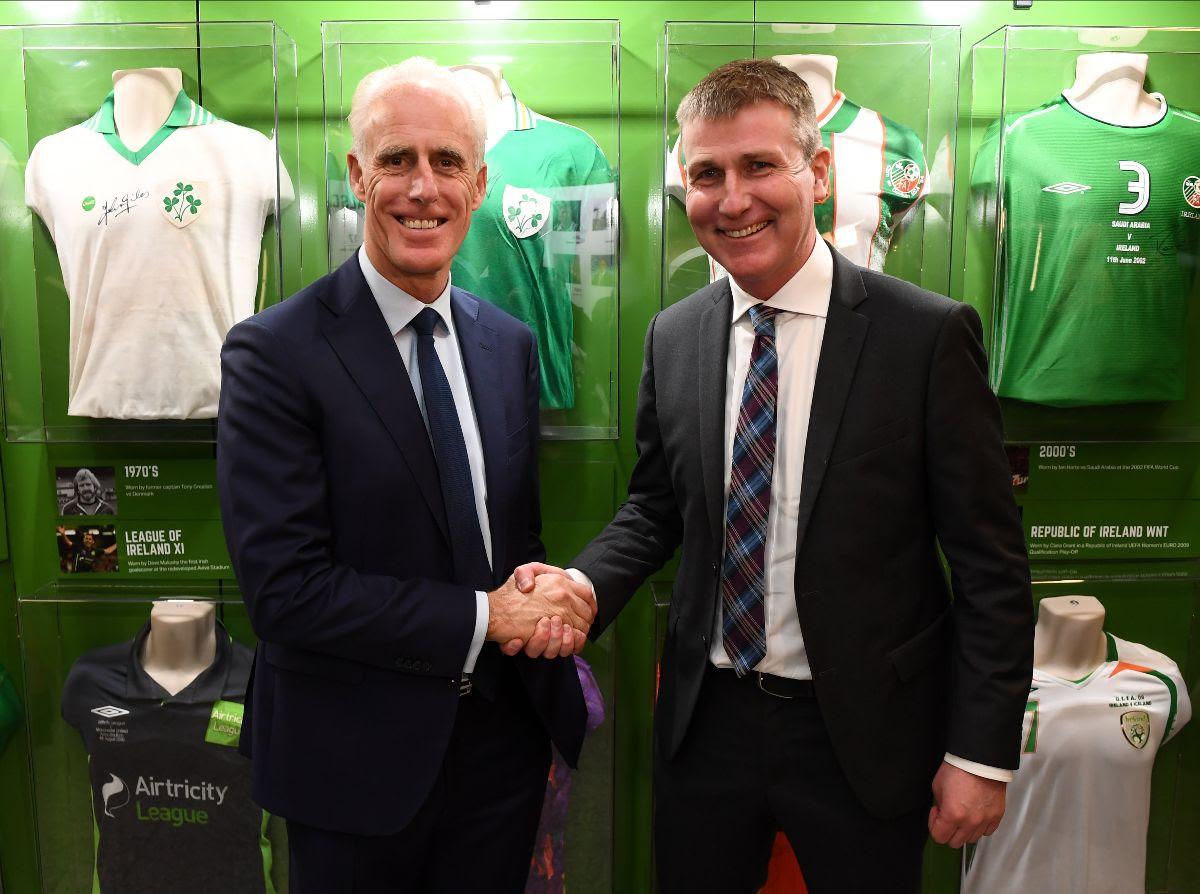 Confidant In His Methods

The sixth reason that Kenny still has time on his side is that he’s confident in what he’s doing. No previous Ireland managers stood out of Trapattoni, O’Neil or McCarthy as confident in their tactics.

These managers would constantly deflect and defend their stone age tactics in a new era of football. Stephen Kenny deserves respect for what he has achieved at Dundalk and shouldn’t be accused for his brave decisions.

The manager was not chosen because he’s Irish or he’s a fan favourite. He was chosen purely because he achieved something great at Dundalk and the Ireland U21s. Kenny has earned the right to be Ireland manager and will require patience from everyone.

Stephen Kenny himself came out this week and claimed to the press he would be a success at Ireland. When questioned after the Wales defeat in Cardiff he said:

“I have no doubts that I will be a success,”, “absolutely no doubts. I have a clear vision of what we want.”

For these reasons Kenny will no doubt be given some leeway given what he and his team have faced. They will look to put 2020 behind them and come back fresh in March for the qualifiers.

Read our other articles on the Ireland Football Team ,keeping you up to date at Sports News Ireland.