Tottenham welcome Arsenal to the Tottenham Hotspur stadium in this London Derby. Spurs are in high flying form as they sit joint top of the table with Liverpool on twenty-one points.

Jose Mourinho will fancy his side to go into the soul lead with Liverpool playing a tough Wolves side. Liverpool is currently injury-ridden with key players missing include Salah who contacted covid recently.

There have been one hundred and seventy-seven games played in this London derby since 1909. Spurs have only managed to win fifty-nine of those but given their form, they’ll add another one to that record.

Tottenham is in sublime form this season as they enter this game unbeaten in their last nine. They have won six, drawn three and lost just one game.

One impressive improvement Mourinho has made to the side is their leaky defense. They have only conceded nine goals which ranks the best in the league so far.

The addition of Swansea’s Rodon over the summer window has given them much needed confidence. His performance against Chelsea shows his ability to command the defense despite the odd shaky moment.

Also, the conversion of Eric Dier from a central defensive midfielder to a center back has given them added depth. Spurs also have scored twenty-one goals this season which ranks second in the division.

Only Chelsea and Liverpool have a better record going one goal better. Tottenham’s great scoring record has largely been down to Kane and Son who look transformed.

Kane and Son together have become one of the deadliest duos the league has ever seen. They have combined for a total of twenty-seven goals. Harry Kane under the spur’s boss has become one of the best strikers in the world right now.

He now has a deeper-lying role than before and he had only made the team better. Kane has now made over nine assists for his teammates, far exceeding the rest of the team.

Son has been their lead goal scorer this season with nine goals. Tottenham have now staked a claim to be in the title challengers’ conversation given their great start.

This along with their strong depth and teams around them suffering from injuries makes their position look even stronger.

However, against Arsenal this weekend some key players may miss out after their Europa League game midweek.

Noticeable absentees from the squad mid-week include Kane, Reguilon, Lemela, and Alderweireld who are injured.

However, in a press conference after their European match against LASK Mourinho remained positive for all players to play on Sunday. He stated that for Kane, Reguilon, Vinicous, and Alderweireld that they are minor injuries and should be ok.

Eric Lamella who has been out for the last few weeks with a knee problem is expected back this week. However, with Spur’s advanced depth they can fill in for these players especially up top with Bale, Moura, and Bergwijn.

I expect Tottenham to line out in their usual 4-2-3-1 formation which they’ve kept to for most of this season. This formation enables Spur’s to defend in numbers and catch teams on the break with the pace at their disposal. Arsenal, enter this game in a run of very poor form for their standards. Mikel Arteta appears to be losing the feel-good factor that the club had when he first arrived.

The fans and board knew that rebuilding the Gunners would take time. However, progress has been very slow. Arteta changed up their formation to make them tougher to beat but as a result, they’ve lost that attacking threat.

A lot of people thought that the Gunners were finally on their way back to good form having beaten Manchester United. However, since then they were thumped by Villa, drew with Leeds, and beaten comfortably by Wolves at home.

The Spurs game this Sunday appears to be the wrong game at the wrong time for Arteta’s side.  They currently reside in fourteenth place on just thirteen points, winning four, drawing one, and losing five.

Arsenal has only conceded twelve goals which defensively has them in the top ten in the league. Unfortunately for the Gunners in goalscoring, they have only scored ten goals.

Ten goals is simply not good enough when you possess the strike force of Aubameyang, Lacazette, Pepe, and Willan. Their goalscoring record then has them as a result in seventeenth place in the League.

The only sides to have scored less than them are West Brom, Sheffield United, and Fulham. Arteta will desperately need to get a run going of some good results before the vultures start circling.

Arteta has praised the decision to allow fans back into stadiums to give his team the needed boost. However, this may also turn out to be a curse as the fans will not be happy with poor performances.

Arsenal’s injury list is fairly unchanged with the same players making the list. Partey, Luiz, and Martinelli are on the list and are possible doubts for the game on Sunday.

Partey is recovering from a thigh problem but has taken part in training this week. Arteta states that he is pushing hard everyday to make the squad for Sunday.

Luiz remains out as his head gash from the game against Wolves will take a few days to heal. Martinelli currently has a knee problem and has been regaining fitness with the under twenty-three side.

He could possibly make an appearance at the weekend. The Gunners will likely line out in a 4-2-3-1 and look sit deep catching spurs on the break.

I predict Tottenham to emerge three-nil victors. Despite both teams playing similar formations, I feel Tottenham’s players are just far superior to Arsenals. Both sides will play deep and look to break forward on the counterattack.

Spur’s latest trend has been to sit back with six in defense, one in midfield, and three in attack.  This tactic when successful is dubbed a Mourinho masterclass.

Tottenham’s best chances in attack will come from the pace of son and Bergwijn getting in behind. Kane if he plays, will drop deep and play balls in behind the Arsenal backline.

I expect the duo of Kane and Son to be amongst the goals come Sunday. For Arsenal, I expect them to drop deep, perhaps adapting to a form of 5-4-1 formation.

This in an attempt to deal with Spur’s sheer pace in attack. Their main attacking threats are to come from Bellerin or Saka whipping in crosses for Lacazette or Aubameyang.

However, given the poor form both strikers are in lately, continuously missing clear-cut chances, scoring might be optimistic. I see Tottenham overrunning the Gunners and largely dominating the game.

Their sheer quality in attack and depth of squad far outmatches what Arsenal can throw at them. I predict a three-nil Tottenham win. 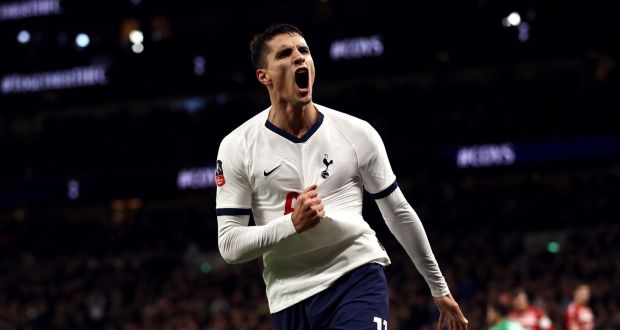 Read our other articles on everything Premier League ,keeping you up to date at Sports News Ireland.

Former Leinster Scrumhalf to Re-Join Ahead of 2021/22 Season