In a group with Slovakia, Hungary, and Finland, the Irish are proving to be the team to beat. After defeating Finland 6-1 on the first day, they have thrashed a poor Hungary side.

Mitch Hillert showed his precise pitching with the batting of Frank Andrew’s team also got some impressive scores.

The roster has been announced for the 2021 Irish Men's National Baseball Team. Team Ireland will compete in the B-Pool Qualifying Tournament in Bratislavia, Slovakia from June 30-July 3. Congrats and good luck to all! #COYBIG ☘ pic.twitter.com/F0xGbtYYA3

Ireland started the match batting and with real tenacity. After captain Leo Farrell walked to first and stole second, a sweet swing by Fionn Gallahar-Hal let the captain run home for the first point of the game.

Next, a high Brian McAuliffe hit lets Gallahar-Hall and David Gallagher at second base run home for two more points.

Hungary calmed themselves to stop any more Irish scores but could not handle pitcher Mitch Hillert’s tricky throws.

In the second inning, Ireland showed a short masterclass in baseball. With the bases loaded a Farrell double sent Mike McGee and JP Dolan home. Tim Shea then was allowed to walk home after a pitching mistake.

McAuliffe, Gallagher, and Farrell made it home by the end of the inning to make it 9-0.

Hungary had trouble pitching, changing their pitcher halfway through the second inning. Hillert did not have the same trouble finishing the round keeping his opponents scoreless.

Ireland took a break from scoring in the third inning as Hungary improved their defense. The score remained the same going into the top of the fourth.

Ireland brought back the class of earlier batting in this round. McGee stole third before a Farrell single let him reach home base. With two strikeouts, Ireland needed some magic which David Gallagher produced. A fantastic home run, the first of the competition, but three more points on the board, with Tim Shea and Farrell also scoring.

Hungary still had no response to the Irish onslaught as the green defense held firm.

The fifth inning was quiet as both teams made changes knowing the game was already won. The score was 13-0 going into the sixth.

Ireland managed to get another man to home base after more stealing from Gallagher and McGee batting the ball far enough for him to score. The score was now at 14-0, Hungary would need points on the board soon or the game would be forced to end early.

Ireland made one last push at the start of the seventh inning. Hungary ended the game with their fourth pitcher, but he could not stop the Irish from getting two more points. First Dolan made an easy jog home from third base and Shea rounded off Ireland’s 16th score.

Like the Finland game, Hungary made a last-ditch attempt to get some points. With men on the second and third base, a great bat by Carlos Rubio sends the first two Hungarians home. Rubio was their star player and he got himself home before substitute pitcher Patrick Mitchell upped his game.

Three was not enough for Hungary to keep the game going and Ireland was given the win after the seventh inning with a score of 16-3.

This was a dominant team performance with no standout players. This game leaves them with a lot of confidence going into their last game against the home country, already qualified for the final.

Ireland will face Slovakia tomorrow, the 2nd of July with all matches being shown live on YouTube on the Slovakia Baseball page. 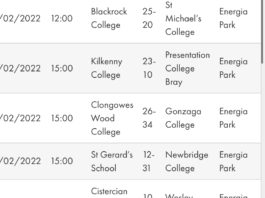