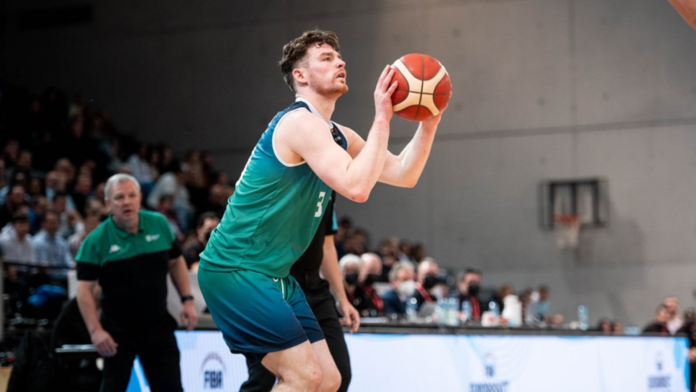 Ireland’s senior men’s team pushed Switzerland to their limit, but ultimately fell to 83-72 defeat in their FIBA EuroBasket 2025 Pre-Qualifiers game in Fribourg. A strong second quarter got Mark Keenan’s side within four points of their opponents by half-time. They trailed by the same score with a minute to go in the contest too, but couldn’t grab their second away win of the campaign. It’s a defeat which head coach Keenan said had left the squad “very deflated” at the missed opportunity.

Taiwo Badmus was Ireland’s top scorer on 20 points, along with picking up seven rebounds and three assists in a strong overall performance. He was backed up by Jordan Blount who finished with 19 points, nine rebounds and an assist, while Sean Flood had 18 points, four rebounds and five assists.

Ireland got on the board in the third minute with a Badmus dunk and they trailed 4-2. The Swiss were in control in the first quarter and led by 16 points with two minutes to go, following Mark Mladjan’s jump shot, which made it 24-8. A pair of three point jump shots from Keelan Cairns and John Carroll straight afterwards settled Ireland, but they would trail 28-14 by the end of the quarter.

The second quarter belonged to Ireland, they outscored their opponents 23-13. A pair of Flood free throws and Blount’s three saw the gap reduced to 30-19 a minute in. Another dunk from Badmus midway through the quarter and it was 34-27. Debutant Roy Downey’s three point jump shot made it 41-37 at half-time, to put Ireland right in the hunt.

The early exchanges in the third were even, Mladjan’s three point jump shot made it 48-41 in the second minute, but up popped Blount with one of his own and it was a four-point game once more. Badmus’ driving layup with just under four minutes gone in the quarter saw Ireland trail 51-48. The Swiss tried to keep Ireland at arm’s length, Roberto Kovac’s three point jump shot saw them increase their advantage to 56-50 at the midway point. But Badmus signalled Ireland’s intent with yet another dunk seconds later. The Swiss would lead 61-52 at the end of the quarter, the final points courtesy of a trio of free throws by Kovac.

With five and a half minutes to go in the contest Mladjan’s driving lay-up made it a 10 point game, 71-61. He would finish as Switzerland’s leading scorer on 24 points. Again Ireland refused to lie down, the excellent Flood landed a three point jump shot, it was followed by a Badmus driving layup. He was fouled on the way in, but didn’t add the extras, however Ireland were very much in contention at 74-68, with 2’49 left on the clock.

Another Flood three pointer from the corner with a 1’04” to go saw that gap down to four once more, 76-72. Not long afterwards Blount had two free throws to close it further, but unfortunately neither landed. The Swiss added gloss to the scoreline in the closing stages, with points from the free throw line and an Arnaud Cotture layup at the death, to seal an 83-72 victory.

Cian Heaphy came on for his international debut late on, while Conor Quinn made his FIBA EuroBasket bow.

Ireland head coach, Mark Keenan, said: “We’re very deflated at the moment, the scoreline doesn’t fully suggest how close, we get that to four points, then going to the free throw line to try to cut it to two. If we had gotten it to two, then it puts more pressure on their next offence. Look, the guys battle right to the end, they put their hearts out there. Slow start, got ourselves back in the game in the second quarter, and look we were right there at the death, it’s just disappointing that last minute and a half.”