Home Other Sports Who Will Be The Winner of the T20 Cricket World Cup 2022? 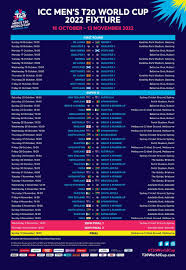 The ICC Men’s T20 cricket world cup match odds from 10CRIC will be held in Australia from October 16 to November 13. A total of 16 teams will compete for the championship.

The previous edition’s top eight teams have already qualified. Namibia, Scotland, Sri Lanka, and the West Indies are the other four teams who advanced from the previous competition. Ireland and the United Arab Emirates advanced to the T20 World Cup from the Global Qualifier Acompetition. The UAE won Global Qualifier A and will compete in Group A of the T20 World Cup, while Ireland will compete in Group B.

The top eight teams have been placed into two groups according to the ICC T20 World Cup 2022 fixtures. Group A consists of England, New Zealand, Australia, and Afghanistan. Group B consists of India, Pakistan, South Africa, and Bangladesh.

There are already early versions of (T20 cricket world cup match odds from 10CRIC ) , though those numbers are likely to change as things unfold on their own. Let’s have a look at the likely teams that will make the top four and finally win the ICC T20 World Cup 2022.

As a new addition to the roster, Ireland is far from being the favorite. The truth is that while they do have fans sporting them, the expectation for them to win is not that strong as of now. Most bookies currently place their odds at 500 to 1.

This makes them a huge underdog, and anyone who bets on them can make a huge amount of money should they somehow surprise everyone and win.

Team India had a season to forget from the previous edition. The men in blue were unable to advance to the knockout round after suffering a thrashing defeat over arch-rivals Pakistan in their opening encounter, followed by another loss against New Zealand. However, India will undoubtedly be one of the favorites to win the championship. The team appears to be comfortable under new skipper Rohit Sharma.

Given that he has been stripped of the captaincy, Virat Kohlimay play fearless cricket. India possesses the means to demolish any opposition. They will be one of the sides to watch in the ICC Men’s T20 World Cup 2022 if they can keep their cool and play their flawless game in the park.

Pakistan had an outstanding performance in the just ended ICC Men’s T20 World Cup 2021. The team led by Babar Azamdemonstrated to the world what they are capable of. In reality, Pakistan was the only team that never lost a game during the league round, winning five consecutive games. However, they were defeated by Australia in the semi-final match, dashing all of their fans’ dreams.

With Babar Azam and Mohammad Rizwan, Mohammad Hafiz, Shoaib Malik, and others, their batting order has shown tremendous discipline. They boast one of the finest pace assaults in the league, with Shaheen Shah Afridi, Hasan Ali, and others firing on all cylinders. The teams cannot afford to take Pakistan lightly this time around.

Australia, the defending ICC T20 World Cup 2021 winners, will be the favorites to win the ICC Men’s T20 World Cup 2022. The team led by Aaron Finch demonstrated why they are the greatest. They boast one of the strongest batting lineups in the league, including David Warner, Finch, Maxwell, Wade, Stoinis, and others. Australia’s bowling arsenal, particularly its speed bowlers, can devastate any opponent’s bowling attack.

The fact that the competition will be held in their backyard, where Australia has historically ruled, will be a huge benefit.

The winner is difficult to predict, but we feel India will win the ICC Men’s T20 World Cup in 2022. However, given the number of upsets that occur in cricket’s shortest format, you should not be surprised to see another side claim the title.