Mayo will go head to head with Tyrone at Croke Park on the 11th of September at 5.00 pm in the first All-Ireland Senior Football Championship final between the two counties live on RTÉ.

Tyrone are aiming to win their first All-Ireland title since 2008 when they defeated Kerry 1-15 to 0-14.

This will be only the fifth final between two partaking counties from Connacht and Ulster, the other finals were in 1925 (Galway beat Cavan), 1943 (Roscommon beat Cavan), 1948 (Cavan beat Mayo) and 2012 (Donegal beat Mayo).

Both teams are coming into this game, winning their provincial titles.

Mayo came back from a lacklustre first half against Galway in the Connacht final to win another Connacht title with a scoreline of 2-14 (20) to 2-08 (14).

Tyrone fought hard in a thrilling and close-knit affair against Monaghan to claim their first Ulster title since 2017, winning the Anglo-Celt Cup with a 0-16 to 0-15 scoreline, putting them joint second with Monaghan on 16 Ulster titles.

Throughout their league campaign, Mayo has been on tip-top form, after their shock relegation. They have bounced back to Division 1 in style.

Before hammering Sligo and Leitrim on their way to facing Galway.

During the first half of their game against Galway, Mayo looked void of ideas for much of the opening 30 minutes.

Mayo came out and blitzed Galway, nullifying their attack, keeping them scoreless until the 61st minute from a free. They came out with a ruthless running game, tough tackling, with Padraig O’Hora and Aidan O’Shea making three exceptional turnovers.

After their Connacht final win, they faced old foes Dublin in the All-Ireland semi-final at Croke Park. After a dismal first-half display that was manifested by Aidan O’Shea missing a 13 metre free, Mayo was down by 6 points at half-time and looked down and out.

But, the second half was anything but dismal from a Mayo standpoint. Trailing by 5 points with 10 minutes to go, Mayo’s young bucks came up and clawed it back to within a point before Rob Hennelly stood up and kicked a dramatic 45” to bring the game to extra time.

Mayo in extra-time controlled Dublin, only conceding one point. Eventually, the Westerners came out 0-14 to 0-17 winners, the first time Mayo have beaten Dublin since 2012.

James Horan’s side will know Tyrone are no pushover and will just be as difficult as Dublin or Kerry. But, they will be confident enough in potentially winning the ultimate prize in Gaelic football that has alluded them for seven pain soaked decades.

At the start of this years campaign, Tyrone looked like a team void of idea’s, running on empty and in desperate need of a facelift.

Not much was expected from Tyrone by the time the Ulster championship came around.

In the quarter-finals, they defeated reigning Ulster champions, Cavan.

By the time the Ulster semi-final came around, pundits and fans alike already had Donegal steamrolling Tyrone.

However, Donegal was dumped out of the championship with a motivated performance by The Red Hand County, winning 0-23 (23) to 1-14 (17) to set up an Ulster final clash with Monaghan. Capturing their 16th title in the process.

Managers Feargal Logan and Brian Dooher have transformed Tyrone from the defensive team that won 3 All-Ireland’s in 6 years to a more well-rounded team with more emphasis on ability and skill rather than strict tactics that stopped opposition.

After the COVID-19 debacle that almost saw Tyrone pull out of the championship, they met old foes, Kerry, in the All-Ireland semi-final and were fully deserving of their victory.

Coming into the final Tyrone will be seen as the underdogs. Dooher and Logan deserve all the credit coming their way, and if they do win on the 11th of September, they will be worthy champions.

The Connacht side has been hit badly with injuries this season, with star forward Cillian O’Connor picking up an Achilles injury in the league while highly-rated defender Oisin Mullin sustained a pulled quad days prior to their semi-final win against Dublin.

Captain Aidan O’Shea had a disappointing game against Dublin, he was substituted by Horan after 48 minutes and Mayo’s fortunes changed, they looked faster and not as reliant on the big man. He will be more than motivated to put in a performance and to finally lift the All-Ireland if given the chance.

For Tyrone, Mattie Donnelly is their star player, a leader and has been a massive presence for this panel for many years now. Peter Harte was immaculate against Kerry, showcased by throwing his body at the ball to stop a Kerry goal.

This game could go either way as it stands, both teams have shown how good they can be, while Mayo has been more vulnerable. Against Galway and Dublin, their first-half display’s were a sign of worry. They do manage to pull it back in the second half but against a Tyrone side as rugged as this, they won’t get the chance.

That is why it is extremely important they do not give away any goals early on, which has been Mayo’s kryptonite in All-Ireland finals.

Both teams have always been known for their resilience and spirit, with Mayo carrying more baggage and pain in finals, Tyrone will and should be more than confident they can capitalise.

It’s not the ability or talent Mayo have lacked in finals, it’s their mental aptitude that has seen them fall against Dublin sides that were just that bit better than them on the day.

Tyrone will be more than capable of winning this match, but given the level of teams Mayo have defeated, the young and hungry team they have and knowing they have what it takes, I believe Mayo will finally be crowned All-Ireland football champions. 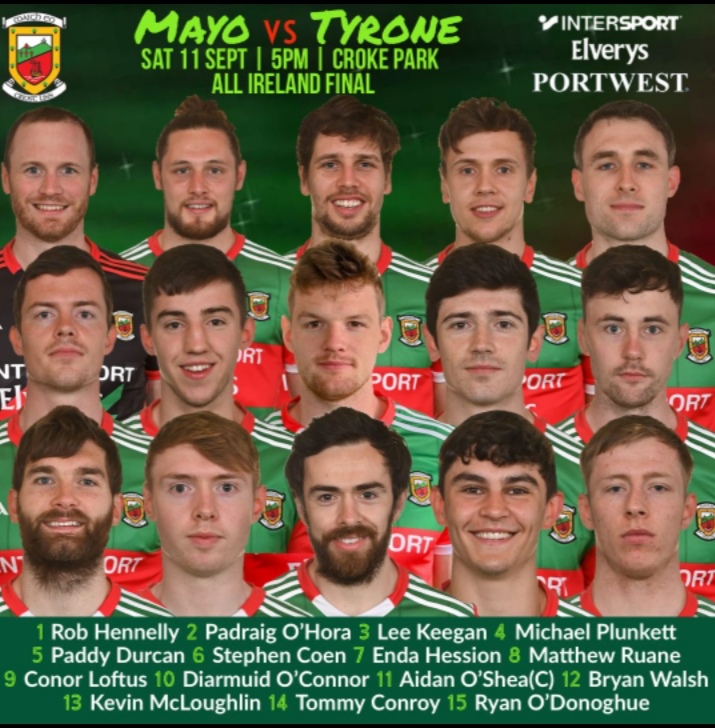 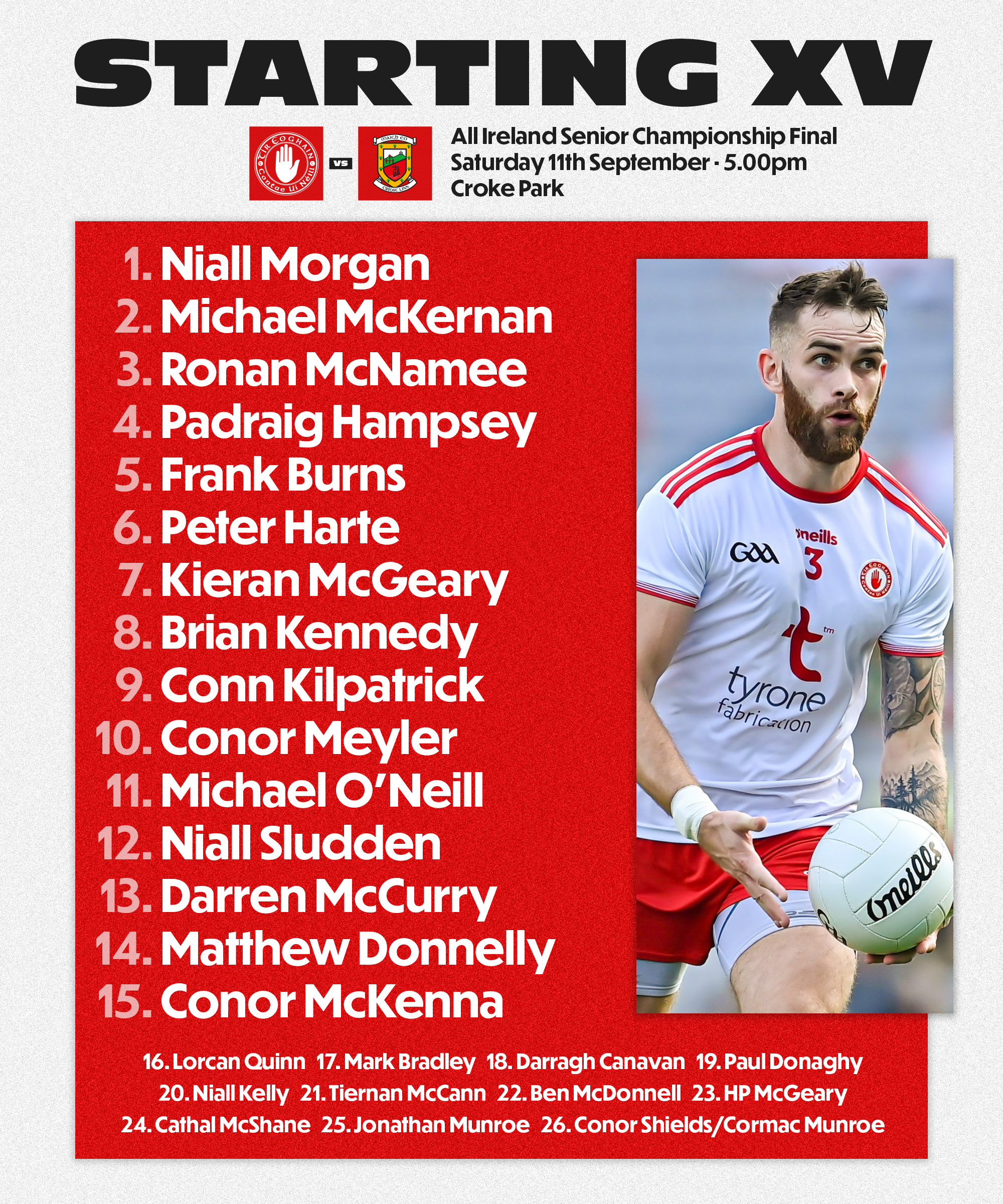