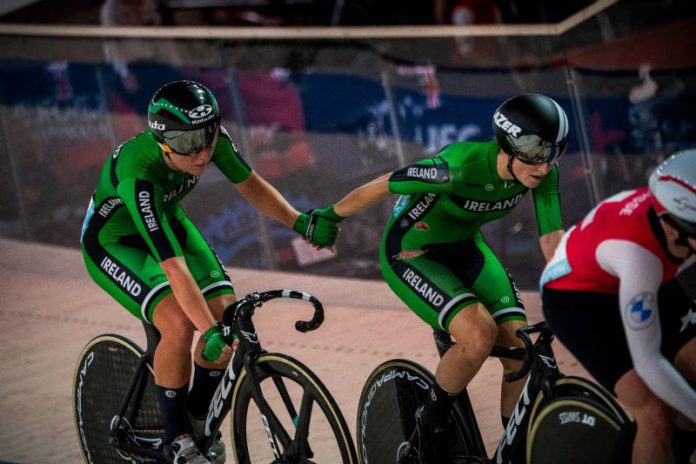 On the final day of competition at the European Track Championships, Ireland finished in 9th place in the Madison while Orla Walsh placed 12th in the Keirin.

In her third event of the competition, Walsh competed in the Keirin progressing through the repechage to the semi-final.

Walsh was delighted to be able to execute the plan and progress to the semi-final. Speaking about the first round and repechage, Walsh said:

“I’m happy that I was able to execute the plan as I was told, it really hurt though. The game plan in the first round was to try to get to the black line. I was dealt probably one of the worst positions which is 5. The Polish girl pretty much brought me to the front but then Starikova came over with such speed with another rider with her and I ended up fourth in that race which meant I went straight into the repechage 15 minutes later. Thankfully there was a good pair of legs in my heat, Mathilde Gros, she came to the front early so I just sat on her wheel, and she towed me around for what felt like forever, and I finished second which meant I got through to the semi-final.”

In the semi-final, Walsh finished outside the top 3 in the race which meant she raced in the 7-12, ultimately finishing in 12th position.

In what was a hectic, fast-paced Madison, Mia Griffin and Lara Gillespie produced a top 10 finish improving on Ireland’s 13th place finish at last year’s European Championship. The Madison got off to a fast start with the lightning pace putting teams under pressure early in the race. A crash in the opening minutes of the race for Griffin, put Ireland on the back foot however Griffin remounted her bike quickly and both riders did well to recover. Unable to stick the pace, several teams found themselves lapped up to 7 times. Ireland finished two laps down resulting in a 9th place finish. Ireland was among 6 other teams to get lapped on the day.

Surviving a scare from her crash, Griffin sustained an injury to her shoulder, doing damage to the a/c joint but is hoping to still compete in the road race.

Head track coach, Dan Henchy was happy with the team’s overall performance at the championships.

“Overall, I’m happy with the team’s performance. I can’t fault the team’s efforts this week. It’s been a mixed bag, some real highs with a few national records obviously with Kelly’s result in the individual pursuit and Orla too and then quite a few bumps and bruises for those who have come down in crashes.

“Whenever you take a team away to a championship event you always get the highs and lows, but I think a few riders will need a bit of recovery and we’ve learned a lot to take into the World Championships and later in the year and then Olympic qualifying starting early next year.”

Attention now turns back to the road for the time trials which takes place tomorrow, Wednesday 17th. National Champion Ben Healy is the sole representative in the men’s time trial while 2022 National Champion Kelly Murphy and runner up Joanna Paterson will fly the flag for Ireland in the women’s Time Trial.