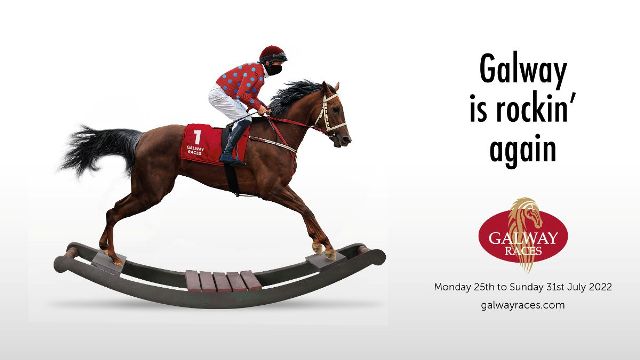 The Countdown Has Begun.
Over €2.164 Million of Prizemoney on Offer at Ireland’s Largest Horse Racing Festival.

In less than a weeks’ time, the highly-anticipated seven-day Galway Races Summer Festival is back, kicking off from Monday 25th to Sunday 31st July. With fifty-three races over the seven days, the Galway Races Summer Festival has a prize fund of over €2 million on offer (total prize fund of €2.164 million) an increase of €346,500 on last year’s festival. Each day offers a minimum prize fund of €100,000 for the feature race, with a minimum value for any race at Galway standing at €17,000. Galway offers a mixed card for the week with national hunt and flat races being held on all seven days.

Anthony Ryan, Chairman of the Galway Race Committee said, “having supported the local community for the last two years, we’re delighted to be back presenting our iconic world-famous Galway Races Summer Festival. This July the team in Ballybrit are gearing up for a very special week and a much-welcomed return of all our race goers to the popular West of Ireland racetrack.”

The hotly contested Tote Galway Plate on Wednesday 27th July, a race synonymous with Galway and key to the history of the festival, has a prize fund of €270,000 on offer, an increase of €20,000 from last Summer. The Tote Galway Plate is a race awash with quality, with experienced chasers taking on emerging youngsters. The race cards on Thursday 28th and Friday 29th July are sponsored in full by the Galway Races long standing partner, Guinness, with Thursdays Guinness Galway Hurdle now worth €270,000, having also received a boost of €20,000.

Partnerships Deals
Demand for race sponsorship has always proved strong for the Galway Races with this Summer seeing some new names added to the sponsors rostrum including BoyleSports who will headline the Saturday card with the ‘BoyleSport Handicap Hurdle’ valued at €110,000, as well as Grá Chocolates and Bathshack.  Feature races on the supporting card include The Connacht Hotel (Q.R.) Handicap of €110,000, The Colm Quinn BMW Mile Handicap of €120,000, and The Irish Stallion Farms European Breeders Fund “Ahonoora” Handicap of €110,000. Partnerships have been the back bone and key to the success of the iconic Galway Races.

Tote to Sponsor the Stable Staff Canteen
Tote, title sponsor of Wednesday’s race card on July 26th at Galway, will also extend its association across the week by sponsoring the stable staff canteen on all seven days of the Galway Races Summer Festival. Commenting on this new initiative, General Manager of Tote Ireland Ross Kierans said, “this year at the Galway Races Tote are proud to sponsor the stable staff canteen for the seven days of the Festival. Like stable staff, Tote attend every single race meeting in Ireland, that’s 390 days of racing this year. So, we understand the demands of racing and having your life set by the racing calendar. It’s important to be able to get something to eat when you are working at the races. Without the contribution of the stable staff day in and day out, there would be no racing, so, it’s important to recognise their contribution.”

Improved Facilities
Galway Racecourse prides itself on improving customer experience for its racegoers. This year racegoers will see lots of new additions to the enclosure including a new improved enclosure layout, new bars, additional covered marquees and public seating, plus the addition of a new Parade Ring Lounge that’s proving very popular for groups.

The Club Members Facility
Having launched ‘The Club’ back in 2020, a new initiate for passionate Galway Races fans, the team in Ballybrit have been delighted with the uptake and its success having now passed the 1,800 member’s mark. For the Summer Festival Club members will have received a Club badge, giving them access to the Club Bar which will be located in the Amenity Building to the rear of the Millennium Stand, another new benefit to being a Club Member.

Best Line Up of Live Music Yet, including Country Music Star Nathan Carter.
This year, the team in Galway present to you its biggest musical line up yet! They have over fifty live music performances and entertainers booked for over the seven days of the festival, including the highlight on Galway Plate Day, Nathan Carter and band for the Country Music Day. In addition, you can enjoy bands such as Spring Break, The Conquerors, The Galway Tenors, Bongo Steve, Jason Fallon plus lots more!

Brand Ambassadors – A Money Can’t Buy Experience
This year Galway Races launched a new Brand Ambassador Programme, inviting fans to become ‘super fans’ for their Summer event. Commenting on this new initiative, Michael Moloney Chief Executive of Galway Racecourse said, “the passion and loyalty of our fans is hugely evident, especially in the run up to, and during the Summer Festival. Social Media has allowed fans to become more closely knit and feel more part of our team. This Summer we wanted to connect on a deeper level with our fans and invite people to register to become an official Brand Ambassador. We had a brilliant response and I’m delighted today to announce our new seven Galway Races Brand Ambassadors:  Darly Miley, Claire Kelly Badger, Robert Moloney, Kate Conlon, Gareth Danaher, Gary Toohey and Maia Kridichart O’Connor’. Each ambassador receives a seven-day VIP pass to the Summer Festival, official Galway Races merchandise, plus an opportunity to meet up close and personal the stars of Irish racing.
Family Entertainment
Since its inception, the Galway Races has always been a multi-generational event, offering something for all ages over the seven days. Sunday is traditionally a focused family fun ‘Mad Hatters Day’ kindly supported by Ireland West Airport who sponsor fantastic prizes for both the childrens and adults colourful ‘Mad Hatter’ competition. New enhancements to the day for families include:
Ticket Sales and Hospitality
The Galway Races contributes over €54 Million to the local economy. Advance ticket sales have proved very strong, pacing ahead of 2019 figures. To celebrate the return of their full festival and to thank customers for their support over the last few years, Galway Races have a special offer on general admission tickets with €5 off each ticket up to the day of the race meeting, plus a new €70 three-day bundle ticket and a new flexi-ticket offer, all available to buy online via www.galwayraces.com

€6,500 Prize Fund for Stable Staff
Paddy Power have returned to sponsor the Best Turned Out Horse Series for the week in Ballybrit and will sponsor €100 to the groom in charge of the winning horse. In addition to this, an overall prize of €2,000 will be given for the Paddy Power Best Turned Out Series to the winning yard.

Increased Television Coverage
The first four action packed days of the Galway Races will be broadcast by RTÉTelevision, coming live to you from Ballybrit at 5pm for over two and a half hours of commentary and insights, that includes the feature race on each day, including Monday’s Connacht Hotel Q.R. Handicap and Tuesday’s Colm Quinn BMW Mile, plus four supporting races each day.

Galway Racecourse are also delighted to have the Irish language broadcaster, TG4, who will broadcast live on Friday 29th and Saturday 30th July. The live coverage on TG4 will include sixteen action packed races over the two days and feature races such as The Guinness Handicap, The Galway Blazers Steeplechase, and The BoyleSports Handicap Hurdle on Saturday. To compliment the above television broadcast, Racing TV will cover and broadcast every one of the fifty-two races live from track.
Ladies Day
Galway Racecourse is delighted to announce a new and exciting three-year partnership deal with the Connacht Hospitality Group for the popular Best Dressed Lady and Best Hat competitions that take place on Thursday 28th July, ‘Guinness Galway Hurdle Day’ during the seven-day Summer Festival. This promises to be one of the biggest days in the Irish racing calendar, and an unmissable day out for fashion lovers.

Friday’s Most Stylish
Athlone Towncentre enters its tenth year leading the ‘Friday’s Most Stylish’ competition at the Galway Races.  This year the prizes are better than ever with celebrity judges Bláthnaid Treacy & Marietta Doran poised to spot the perfect balance of creative styling of high street pieces with personal flair.  This year sees the biggest prize fund on offer to date for the competition winner with a Shop & Stay Break courtesy of Athlone Towncentre.  The lucky winner will leave Galway Racecourse with a €2,000 Athlone Towncentre Gift Card, a luxury two night break in the four star Sheraton Athlone Hotel and a gorgeous piece of jewellery courtesy of Fields The Jeweller. Check out www.galwayraces.comfor more information on both ladies’ fashion competitions.

Decorate to Celebrate- Win Tickets to the Galway Races for your staff
The Galway Races are inviting businesses across Galway City and County to take part in their ‘Decorate to Celebrate’ competition. Businesses, no matter what size, could be in with a chance of winning an exclusive prize of a VIP Day at the races for your team worth €3,000 plus tickets for the races.

Follow us for all the latest updates LIVE as they happen on our social media channels using the hashtags #GalwayRaces #GiddyforGalway For more information and all the latest news from the team in Galway, visit www.galwayraces.com