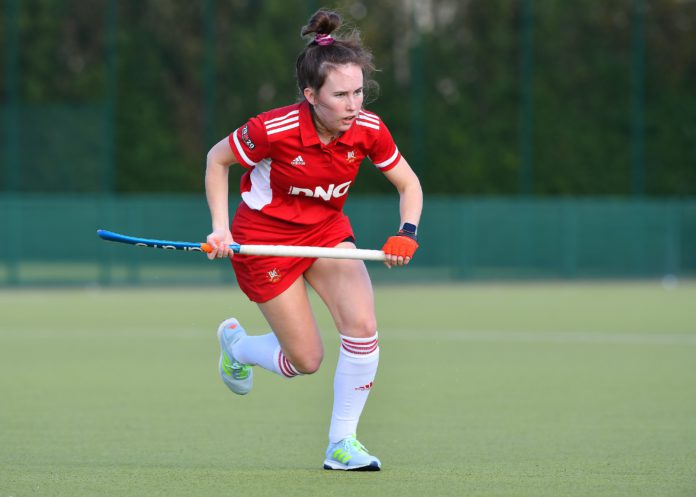 Old Alex won an enthralling, if not high scoring game, with Abbie Russell’s single goal just before the end of the third quarter lifting the Milltown side up to a share of third spot with each club now having played 12 games.

Pegasus had the better of the first half with Alex Speers getting a lot of joy on the right sided attack but she came up against Holly Micklem – following her recent call-up to the Irish senior squad for their trip to France – who was in super form.

The ball seemed magnetised to the goalkeeper’s boot as she kicked away four corner shots and brilliantly slid out to deny Speers when through one-on-one. Lena Tice was also impressive with timely tackles and interceptions as the Dubliners hung tough.

In the second, half Old Alex took the upper hand and created some good chances from open play, causing panic stations when Millie O’Donnell, Jessica McGirr and Tice all testing Megan Todd in one melee.

McGirr had a goal initially awarded when her rising slap went up off Shirley McCay’s back and over Todd; after consultation, it was ruled out for the danger created.

Alex did get their goal when Niamh Sweeney slid a backhand pass to Mikayla Power whose one-time deflection across goal was out of reach of the goalkeeper to the back post where Abbie Russell was waiting to apply a diving tip-in.

The hosts ran up a couple more corners and Emma Russell went close with a powerful shot but without the insurance goal, the game remained lively right through to the final whistle.

Laura Motyer’s double helped Corinthian move into a share of top spot in Group A of the women’s EYHL DIvision 2 Group A, seeing off a tough challenge from Galway.

It was scoreless after the first quarter but Corinthian began to take greater control over the game in Q2 with Camila Arbulo getting things motoring. They took the lead when Christine Seggie scored on the half hour via a corner.

The second half saw that second quarter pattern continue and the reds moved further clear with Jessica Meeke the creator and Motyer the scorer on two occasions. Their first interaction saw Meeke slide a backhand pass into the dangerzone for 2-0 on 45 minutes and they reprised that link-up in the last 10 minutes for the third.

At the mid-point in this group, Corinthian join Ards on 17 points, 10 clear of third placed UCC.

“After a tough first half, we finally got a bit of momentum which are key for us to progress in this league,” said Motyer after the win.

“They were hard to break down, very strong defensively and fair play, too, to our defence who are always strong. We take it one game at a time and hopefully we will be there for the playoffs at the end of the season.

For Galway’s part, player-coach Manley – an Olympian from 2016 – said her side’s performance was a big step-up for them in their maiden season in EYHL2.

“It was good. We have struggled in matches coming out hard from the start and this was probably our best start,” she said.

“Over the course of the season, we have shown a lot of growth and that showed in this match. We have a lot of young players who are getting more and more confident to play at this level and it is really exciting to see them grow.

“I really like it over here. If I was back home in the US, now that I am not in the US team, I wouldn’t be able to play hockey. Coming over to do a masters at NUIG, getting to continue playing hockey is really great. Galway is like a little family and the support system is really great.”

Lisnagarvey produced a defensive masterclass to outdo Three Rock Rovers and advance to the final four of the men’s Irish Senior Cup, winning 2-0 at Grange Road.

With Jonny Bell marsahlling things, they gave precious few chances to the current EY Hockey League leaders and eventually took their chances in the second half to win a big battle.

Indeed, they might have been in the clear earlier in the contest but for some outstanding Conor Quinn goalkeeping – not for the first time this season – as he denied Troy Chambers and James Lorimer early on.

Rovers were shy a number of their front line with Ben Johnson, Luke Adams and Evan Jennings out of action and they struggled to get much traction, the pick of their chances flashing just wide from Ross Canning before half-time.

Garvey went in front with half an hour to go when Ben Nelson charged down a couple of attempted clearances and followed up to give his older brother Matthew the chance to swipe home. They looked the more likely to strike again and they were two to the good in the last 10 minutes when Andy Edgar flicked home from the penalty spot after a swift counter-attack.

Peter Blakeney whizzed a corner shot just wide in the dying moments but Lisnagarvey were well worth their win, setting up a semi-final date with Glenanne.

In the men’s Irish Hockey Trophy, the all-Ulster semi-finals yielded a final showdown between North Down and Queen’s after they overcame South Antrim (6-2) and Portadown (3-2), respectively.

In the women’s Irish Senior Cup, Banbridge and Catholic Institute’s quarter-final was postponed for a second time.

Avoca reached the final of the Irish Hockey Trophy with a shoot-out win over YMCA. Orla O’Brien had Avoca 1-0 up until the closing minutes before YMCA withdrew their goalkeeper in favour of an extra outfielder and it paid dividends when Naoise Carraher netted for 1-1.

But they could not carry that momentum into the shoot-out where Avoce won out 3-1 with efforts from Aoife Grogan, Anna Richardson and Sarah Dillon, Joanne O’Grady getting YMCA’s reply.