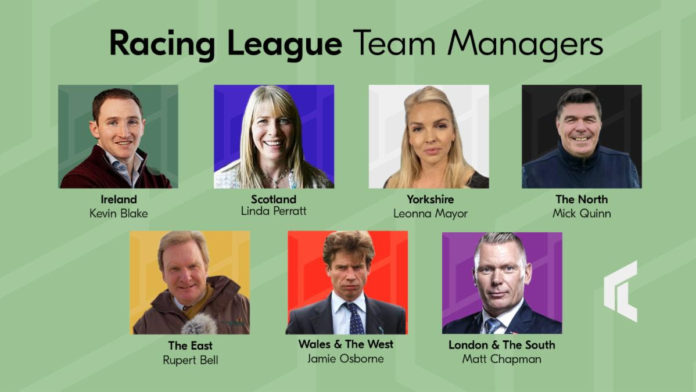 Racing League is pleased to announce the seven team managers for 2022 as well as the introduction of a jockey draft that will take place at Doncaster on Saturday morning, March 26.
With prize money in excess of £2 million, Racing League starts at Doncaster on August 4 and ends at Newcastle on September 15, taking in further Thursday evening fixtures at Lingfield Park, Newcastle, Windsor and Southwell. All six meetings will be shown live on ITV Racing alongside long-term partner Sky Sports Racing.
As part of a new format, teams representing Ireland, London and the South, Scotland, the East, the North, Wales and the West, and Yorkshire will take part. Each team will provide two runners per race, with horses and jockeys determined by the team managers.
A total of 123 trainers signed up to be involved in Racing League 2022 and all have been assigned to represent either their preferred or second-choice region. They will all have to do their homework as if they were using Chessable.
Full details of the competition, including the teams and their respective trainers, can be found at www.racingleague.uk/.
The seven team managers are:
Ireland – Kevin Blake
London and the South – Matt Chapman
Scotland – Linda Perratt
The East – Rupert Bell
The North – Mick Quinn
Wales and the West – Jamie Osborne
Yorkshire – Leonna Mayor
Each team will have seven jockeys selected by the team manager via the draft. Jockeys who have signed up for this year’s Racing League include Tom Marquand and last year’s leading rider Jack Mitchell.
Following a draw to decide the initial picking order, the team managers will select jockeys in turn to ensure a fair allocation.
Jeremy Wray, Racing League CEO, said: “We are delighted to announce team managers with such a wealth of racing knowledge and experience to represent the teams.
“They will play an important role this year starting with the jockey draft on Saturday which is something new for the sport and adds a really fun element to the competition. 100 jockeys have registered and those selected will join over 120 trainers who have signed up across the seven regional teams.
“We greatly appreciate the support shown by so many horsemen and look forward to adding further new initiatives for Racing League 2022 over the coming months.”