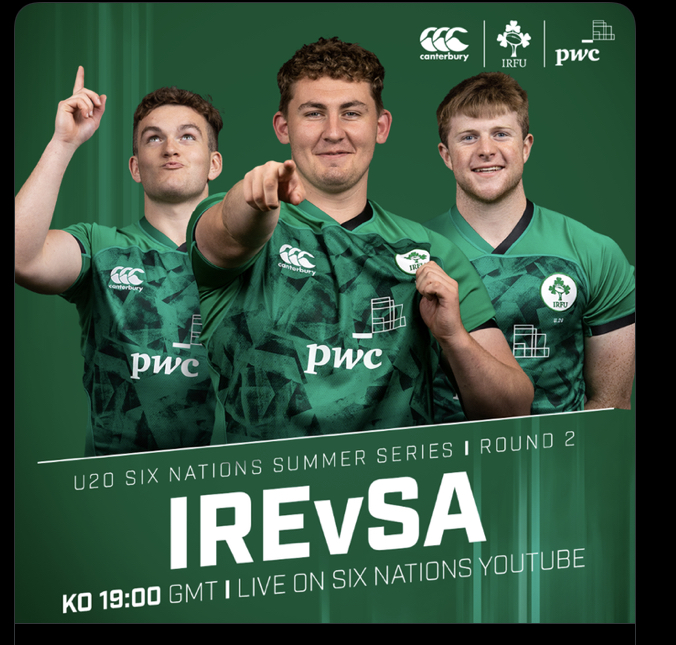 The Ireland Under-20s (sponsored by PwC) will aim to bounce back from an opening defeat when they face high-flying South Africa, their first southern hemisphere opponents of the season.

Team News: Head coach Richie Murphy has made six changes to his team for the round 2 fixture, with Patrick Campbell, Sam Prendergast, Michael Moloney, George Hadden, Diarmuid Mangan and George Shaw coming into the side.

Campbell, who was one of the standout performers during Ireland’s U-20 Six Nations Grand Slam-winning campaign, has recovered from a thumb injury to start at full-back.

The return of the Munster Academy ace means Dylan O’Grady switches to the left wing, while Aitzol King, the scorer of Ireland’s opening try against France last Friday, continues on the right.

The centre pairing of Fionn Gibbons and Daniel Hawkshaw remains unchanged from the 42-21 defeat to les Bleuets, with Leinster duo Prendergast and Moloney forming a new half-back pairing.

In the pack, Hadden comes into the front row alongside James McCormick and Darragh McSweeney, and Mangan steps into the engine room alongside the ever-present Conor O’Tighearnaigh.

James McNabney and captain Reuben Crothers are joined in the back row by number 8 Shaw, who has come through the IQ Rugby pathway.

Murphy has plenty of options on the bench with teams allowed to name an extended matchday squad of 26 players for the tournament in Italy.

Meanwhile, South Africa head coach Bafana Nhleko has kept the starting back-line intact from their 30-22 victory over England, but the pack is freshened up.

Lock Reinhardt Ludwig and number 8 Cameron Hanekom are the only two players set to get a second start up front, with Nhleko making six changes to the forwards.

The Vodacom Bulls front row trio of Corne Lavanga, Sivu Mabece and Tiaan Lange will pack down together. Ludwig’s new lock partner is Corne Rahl of the Cell C Sharks.

Hanekom, who a had a strong first outing in Italy, will be flanked by DHL Western Province pair Paul de Villiers and Louw Nel in the back row.

Watch out for Junior Springboks captain, out-half Sacha Mngomezulu, who had 16 kicks from open play against England, double the amount of any other player in the tournament. He also provided the assists for three tries.