We have a list of five great GAA books that are well worth buying as Christmas presents.

It’s becoming increasingly popular nowadays for recently retired GAA stars and others involved in the association to bring out a book!

It’s almost par for the course in modern times but to be fair there have been some crackers released over the years. Here are just five of many great books which are well worth a read and go to www.kennys.ie to get the best deals and free delivery.

This is a must read for GAA fans. In a tale of a GAA clubs season, Christy O’Connor takes us through the life of a club hurler with his beloved St Jospeh’s Doora Barefield in county Clare.

This book is something every club player can relate to regardless of what level you play at because no matter where you are from or who you play with there are always going to be the same elements of politics, friction, confrontation and many other things.

What Christy also encapsulates is the deep trauma that he has suffered both on a personal level and in terms of playing itself. There are many twists and turns along the way in this one and it’s not to be missed out on. Click here to buy for 4.64e

Mickey Harte – Presence Is The Only Thing

It’s fair to say that Mickey Harte has been through the mill both in his managerial involvements with Tyrone Footballers and of course the hardship he has suffered on a personal level.

This book went to print before the untimely loss of his daughter Michaela, but nevertheless she happens to play a major part in the book by being heavily involved at different stages.

A deeply spiritual person, Mickey Harte opens up about his personal beliefs and how he relates these characteristics in a managerial capacity. Reading this book is almost therapeutic and is as compelling a book that was ever wrote. Click here to buy for 10e

Although Jim Stynes made a real name for himself as an Australian Rules Footballer, he made the initial break as a footballer in Dublin.

Stynes wrote this book in conjunction with his cancer illness which led to his premature death four years ago. Again this book is deeply personal but the journey in which you take while reading this book is fascinating.

Parallel’s can be drawn from the manner in which Jim deals with his illness to the way he carried himself on the field. He was simply a class act in every stretch of the imagination and if you don’t feel emotionally attached or motivated by this book then there is something seriously wrong. Click here to buy for 4.75e

Working On A Dream – Damian Lawlor

We all hear of the efforts and sacrifices that players and mentors make to win provincial trophies and All Irelands.

What we tend to forget is that players in the weaker counties are also putting in the same time and effort into their challenge the same way as the best in the business are.

This brilliant book by Damian Lawlor focuses on the Waterford footballers and there 2009 season. Lawlor spends the year with the panel and this magnificently sums up the efforts in which these counties are making in order to try reach greater heights.

In My Own Words – Paul Galvin

Love him or hate him, Paul Galvin is a name that most Irish people will know. A controversial character, Galvin was one of the more unique types of footballer who was easily distinguished from his peers on the Kerry Senior Football Panel.

Paul was never a stranger from entering the referees notebook but there are many other sides to him that you simply wouldn’t realise until you read this book.

Having read this book, you may discover a new side to Galvin and his open and honest approach to this book makes it a very interesting read. Click here to buy for 10.31e 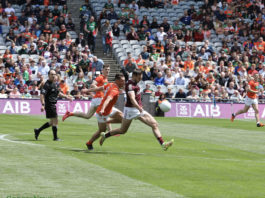