Home Other Sports Cricket – Ireland moves through to semi-finals at the T20 World Cup... 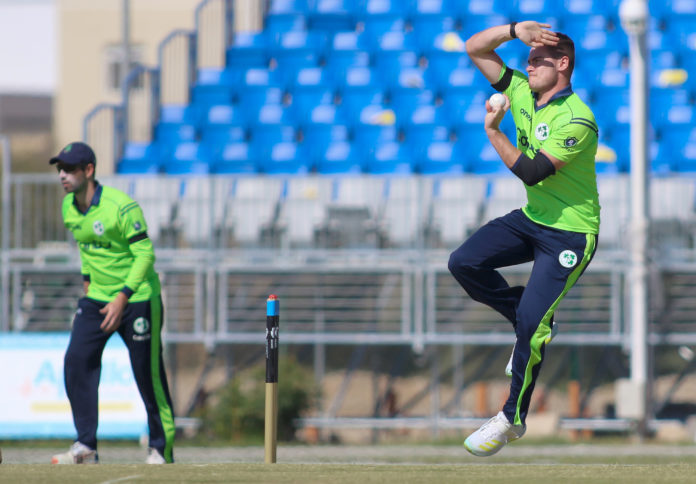 Ireland Men have progressed through to the semi-finals after a comprehensive win over Germany in a must-win Group Stage match of the ICC T20 World Cup Qualifier at the Al Almerat Stadium today.

Ireland started their run chase knowing that if they could complete the victory in less than 16 overs they would guarantee themselves progression to the semi-final stage after Bahrain – playing in a concurrent match – posted 172-5 against UAE, setting up an exciting finish to this Group stage of the tournament.

After an efficient bowling performance that restricted Germany to 107-7, the Irish batters completed the run chase in 13.1 overs with Harry Tector flashing a square cut to the boundary to bring up the winning runs.

Paul Stirling (34) and Andrew Balbirnie (32) posted a 67-run opening stand from just 47 balls to get the run chase off to the necessary start, but despite both openers falling within three balls of each other, Tector and Lorcan Tucker saw out the win.

During Balbirnie’s innings he brought up his 5,000th run for Ireland across all formats.

In the other match, Bahrain completed a remarkable 2-run win over heavy favourites UAE, but it wasn’t quite enough to progress to the semi-final on net run rate meaning Ireland finished first in the group.

Ireland’s opponents in tomorrow’s do-or-die semi-final will be determined in this afternoon’s matches – with the winner of tomorrow’s semi-final qualifying for the T20 World Cup in Australia in October.

Earlier in the day Irish skipper Balbirnie won the toss and decided to bowl first hoping to take advantage of what he noted was a tacky pitch.

The Irish bowlers were disciplined early, bowling tight lines and producing late swing in early morning conditions. It was Josh Little who broke through first, rapping Talha Khan on the front pad and adjudged adjacent by the umpire for 9. Little followed up in his next over with the wicket of Justin Broad, also for 9, this time beaten for pace and a top edge flew to Lorcan Tucker behind the stumps.

Immediately after the power play finished, Balbirnie threw the ball to his spinners and both Andy McBrine (2-15) and Simi Singh (1-21) responded with great spells through the middle overs. McBrine has bowled exceptionally tightly in this tournament to date, with an economy rate of just 4.42 to go with his three wickets.

Faisal Mubashir (45*) and Dylan Blignaut (22) – who plays club cricket with The Hills Cricket Club in Ireland – were the only German batters to reach double figures as wickets fell regularly. The batting side managed to strike 40 runs from the last five overs, but their total of 107-7 from 20 overs looked well below par.

All of Ireland’s five bowlers contributed with at least one wicket apiece, with Josh Little’s 2-13 the pick with a welcome return to form.

After the match captain Balbirnie said:

“We were really good today, we set ourselves the task at the toss, and our bowlers put it in good areas – there was a bit in it for the bowlers, and they bowled tightly. It was a really complete performance and we’re starting to get it together at the right end of the tournament.

“I think the win against Bahrain got us up and running – we tend to play better the longer a tournament goes. There was good buzz around this morning, the guys knew we had to win two games to reach a World Cup, and we’ve got rid of one of those and are now in a semi-final.

“All of our bowlers performed well today – we have guys like Campher and McCarthy on the bench who could do a job as well – we’re happy with where our bowling is at, but it means nothing unless we turn up and do the same thing tomorrow.”

Ireland meets their semi-final opponent tomorrow at 2pm (local time) / 10am (Irish time) at the same venue. Given the number of permutations in Group B, the opponent will not be known until later today.