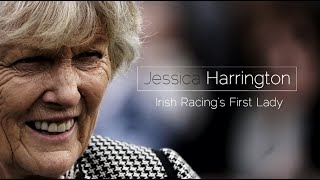 The Irish Oaks winning duo of Jessica Harrington and Shane Foley will aim to continue their fine run of form at Naas on Wednesday where dual course and distance winner Sablonne lines out in the Yeomanstown Stud Irish EBF Stakes.

Yeomanstown Stud are a long-standing local sponsor at Naas and Harrington will try to snare Wednesday’s feature contest with a daughter of Yeomanstown’s leading stallion Dark Angel as Sablonne faces 11 rivals.
It is a race littered with impressive course and distance winners as the Ger Lyons-trained Sacred Bridge returns to her favourite track where she too boasts a couple of wins, while the Johnny Feane-trained Ano Syra, Aidan O’Brien’s Contarelli Chapel and Fozzy Stack’s Red Lacewing all passed the Naas winning post in front previously.

Sablonne is the most recent of those to score at Naas having obliged here last month and Kate Harrington, assistant to her mother Jessica, gave a positive update on the Kirsten Rausing-owned three-year-old.
“Sablonne takes her chance in a race we won in 2019 with Servalan. Sablonne’s two wins have come at Naas. She was very good last time out when winning over the course and trip and has come out of the race very well. Hopefully she can make the step from handicap company into Listed company.”
Harrington added: “Of course there is the very good Sacred Bridge there, who you’d have to be scared of. She was possibly disappointing at Royal Ascot but she was good at Cork before that and of course, was a very good two-year-old. And Ano Syra has been a progressive filly, winning two very competitive handicaps the last twice.”
Speaking at entry stage, Johnny Feane said of Ano Syra: “She’s in good order. She’ll love the ground. She’s obviously a progressive three-year-old so it’ll be interesting to see how she goes in it.
“She’s got an entry in a Group 3 in a few weeks’ time after Naas so we’ll see how she goes but they’re the plans and the natural progressions if she keeps doing the right things. We’re just taking baby steps with her.

“She’s giving us the right signs all along that she can be a filly to be competitive at this sort of level. Early on in the year, the jockeys thought she’d get plenty of black type. I hope they’re right, you never know. We just wanted to take it step by step and she’s done it well winning four of her last five now so we’ll see how she goes in Naas next.”
The Harringtons are also well represented in the Arqana Irish EBF Marwell Stakes with Ardad’s Great and Funny Money Honey both looking to open their account in the Listed contest.

The race is sponsored by Arqana, the leading French sales company who are in their third year sponsoring the juvenile contest. Arqana’s upcoming August Yearling sale hosts the best of European thoroughbreds by top sires during the prestigious Deauville meeting.

In what looks a very competitive heat, Harrington is hoping for a bold showing from both her representatives, with Shane Foley riding Ardad’s Great and Gary Halpin wearing the same colours of owner Theresa Marnane on Funny Money Honey, who is a French recruit.

“It looks like a nice opportunity for Ardad’s Great. She was very unlucky not to get her head in front against the boys at Tipperary the last time. She’s come out of that very well and we’re hoping for a massive run.
“Funny Money Honey is a filly we don’t know a lot about. She has come from a trainer in France. This will be her first run for us and we’re hopeful she will run a big race. She’s a very nice and uncomplicated filly.”
Reflecting on another special weekend for Commonstown, Harrington added: “Magical Lagoon is a very tough filly and she did it well. She’s progressive, she never knows when she’s beaten. She’s so tough.
“It means the world to us and to everyone in the yard. From Zara, who rides her out, Lauren, who looks after her, and Adrian, who’s her barn manager. They all do an exceptional job getting this filly primed for the day.
“And of course it means so much to Mr Zhang. He puts an awful lot into the business and it’s great to see him get his reward with a Group 1 Classic winner.”
Ger Lyons goes to war with a course and distance winner again as Mauiewowie returns after a very impressive display earlier this month.

British representation comes in the form of Lady Hollywood, who is on a hat-trick following wins at Lingfield and Beverley for trainer Alice Haynes.
Dual winner Lady Tilbury is an interesting contender as she looks to bounce back to winning ways after a creditable effort at Royal Ascot last time out.
Marnane said at entry stage: “She’s in good nick and we’re happy with her. We gave her a little bit of time off after Ascot and this is a nice fit for her now. She likes quick ground too so it looks a good race.
“We were very happy with her in Ascot. She was a little bit immature. She hit the gates and did a bit too much in the early part of the race and paid the penalty for that but she showed plenty of ability. She travelled very well in a Queen Mary so she obviously has plenty of gears.

“The negative is she tried hard in the wrong way, which isn’t like her, but the positive was that she hit the line well and it’s no disgrace to be beaten five or six lengths.
“She went away for a gallop the other day and was very relaxed and very good so we’re happy with her. She needs to keep progressing but she has the size to do it.”
Also featuring on the Naas card is the Hurling For Cancer Is Back August 16th Rated Race for which Jim Bolger is putting up a €1,000 cash prize for the grooms in charge of the best turned out horses in the race: €500 going to the best turned out, €300 to second place, €200 to third place. Tickets for the very popular Hurling For Cancer match will be available at Naas on the night and there will also be a Cúl Sliotars stand on the night.

Eamonn McEvoy, manager of Naas Racecourse said: “We are really looking forward to our next Summer BBQ & Music Evening meeting on Wednesday. We have a quality card on show with two Listed races and live music afterwards by After Dark.
“I would like to thank all our sponsors for their continued support, from local sponsors Yeomanstown Stud and O’Neill & Co. to Sean Barrett Bloodstock Insurances and the Irish EBF all the way to Arqana from France. The support is invaluable.”

The first of seven races is at 5.30pm with live music on the evening comes from the extremely popular band After Dark, who will take to the stage after the last race
Admission tickets are just €15 and Beer & Burger packages are available to book online at www.naasracecourse.com.