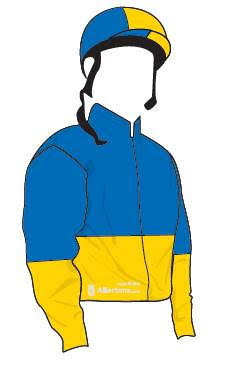 Lisnagar Oscar, one of the biggest priced winners at The Festival™ at Cheltenham in recent years, will bid to regain his Paddy Power Stayers’ Hurdle crown next Thursday (March 17th) in custom silks representing the national flag of Ukraine.

The Rebecca Curtis-trained gelding stunned racing fans by winning the Stayers’ Hurdle in 2020 at odds of 50-1. He failed to repeat the feat last year but his owners – The Racing For Fun syndicate – are hoping he can do them proud next week while also raising awareness and funds for the people of Ukraine.

The Jockey Club, which runs Cheltenham Racecourse, is supporting the charitable efforts of The British Red Cross in its response to the humanitarian crisis arising from the Russian invasion of Ukraine with a series of initiatives throughout The Festival and has made a donation of its own to the British Red Cross’s Ukraine Appeal.

One of those initiatives is the wearing of the custom silks in the blue and yellow of the Ukraine flag and follows a suggestion by racehorse owner Colin Peake, who was determined to raise awareness of the humanitarian crisis unravelling in Ukraine.

Peake explained: “Getting as much coverage as possible to highlight what is happening in Ukraine and getting people to put their hands in their pockets and support the humanitarian charitable efforts on the ground can only be a good thing.

“I thought to myself, ‘what better way to do it than have a horse running in the colours of the Ukraine national flag at Jump racing’s flagship event with all the coverage it receives?’ It’s all about getting the blue and yellow colours at the heart of the action.

“I got in contact with Allertons and they agreed to make a set of silks representing the flag of Ukraine at no cost and I then tried to find a horse that could wear them at The Festival.