Home GAA McEntee to stay on with Meath for 2022 season 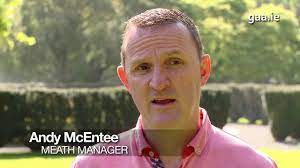 Andy McEntee will see out the final year of his current contract with Meath after surviving a vote on his position as manager of the county’s senior footballers.

The vote took place at a county board meeting and was held in secret after the Meath executive recommended that the incumbent’s term with the side not be extended.

The executive had voted 8-7 in favour of letting the former Meath minor manager go but the clubs rejected the recommendation put forward.

LMFM Radio reported that the management committee did not receive the two-thirds majority it needed and that the Yes votes outweighed the no votes.

46 voted in favour of retaining McEntee for another year while 27 agreed with the committee. There was one spoiled vote.

The former Ballyboden St Enda’s manager has been at the helm of his native county’s senior side since 2016 and has taken them to Division One as well as two Leinster finals.

However, the county are yet to win a Leinster title since 2010 and have struggled to bridge the gap between themselves and Dublin on several occasions.

Their second-half performance in the match was hailed by many as they came close to stopping Dublin, who won their 11th Delaney Cup in a row this year before eventually falling short to All-Ireland finalists Mayo.

Meath GAA announced the news on social media after the meeting had taken place: “The Meath G.A.A. County Committee has decided to endorse Andy McEntee as the County Senior Football Manager for 2022.

“Andy McEntee will now complete his three-year term and we are excited for the new year of Gaelic games to come.”