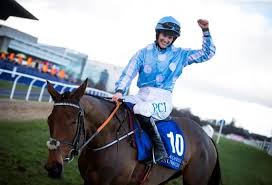 The Cheltenham Festival’s highly anticipated clash between Constitution Hill and Honeysuckle has fans on the edge of their seats.
Constitution Hill, trained by the legendary Nicky Henderson, will look to cement his dominance in the sport with a win in the Champion Hurdle.
However, he will face Honeysuckle, the reigning two-time Champion Hurdle winner, who is determined to end her career in style and make history with a hat-trick in the event.
Top trainers Willie Mullins and Henderson will bring their best horses to the race, including State Man, Vauban, Sir Gerhard, Sharjah, Echoes In Rain, and Marie’s Rock.
The Stayers’ Hurdle is heating up as Flooring Porter, the reigning champion, sets his sights on an historic third consecutive victory. But the Gavin Cromwell-trained eight-year-old will have to battle it out against a fierce field of 28 and fend off a strong challenge from the Irish powerhouse Home By The Lee, who has defeated him twice this season. Joseph O’Brien’s charge is a top contender, having impressively won the Jack de Bromhead Christmas Hurdle at Leopardstown last month. And with Paisley Park, a veteran horse who has finished third to Flooring Porter in the race for the last two years, and Emma Lavelle’s Champ, who defeated Paisley Park in Newbury’s Long Distance Hurdle, also expected to run, the stakes are high and the competition is fierce. This race is not one to be missed as the best stayers in the sport go head-to-head in a battle for glory. Will Flooring Porter make history with a three-peat victory or will a new champion rise to the top? The tension is building and the excitement is palpable as the Stayers’ Hurdle promises to be one of the many highlight of the Cheltenham Festival.