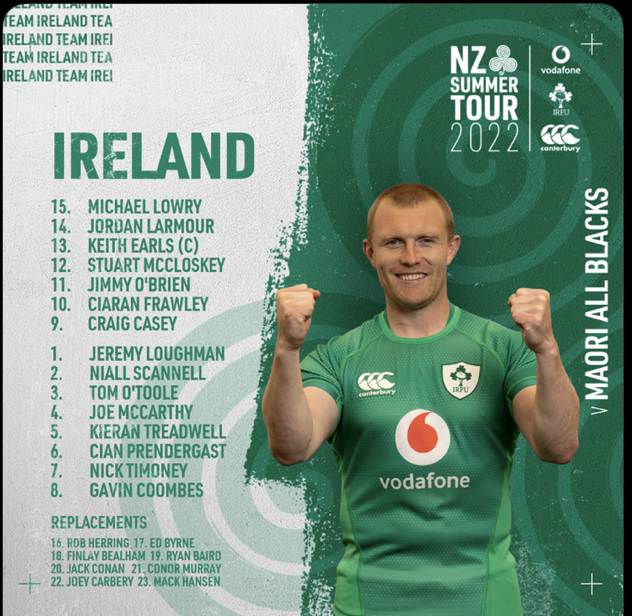 Andy Farrell has announced the Ireland side that will play against the Māori All Blacks in the Sky Stadium in Wellington on Tuesday evening (Kick-off 7.05pm NZ time/8.05am Irish time).

Keith Earls captains the side as they seek to square the Series against the Māori All Blacks having lost the first fixture in Hamilton.

Craig Casey and Ciaran Frawley are retained at half-back while Stuart McCloskey comes into partner Earls in the midfield. Michael Lowry is introduced at fullback with Jimmy O’Brienswitching to the left wing and Jordan Larmour is on the right.

The front row consists of Jeremy Loughman, Niall Scannelland Tom O’Toole with Joe McCarthy andKieran Treadwell named at lock. The backrow from the first game against the Māori is retained with Cian Prendergast at 6, Nick Timoneyat 7 and Gavin Coombes at No.8.

The game will be televised live by SKY Sports at 8.05am Irish time.

The matchday 23 is as follows (Province/Super Rugby Club, and Iwi in brackets, debutants in bold).

The midfield sees a new combination, with Alex Nankivell (Ngāti Pikiao) and Bailyn Sullivan (Ngāti Kahungunu) to start at 12 and 13.

The back three is made up of Connor Garden-Bachop (Ngāti Awa) on the left wing, Shaun Stevenson (Ngāpuhi) on the right, with Josh Moorby (Ngāti Maniapoto) debuting at fullback, Hurricanes teammates Ruben Love (Te Atiawa) and Billy Proctor (Ngāi Te Rangi/Ngāpuhi) to be injected off the bench.

Māori All Blacks Head Coach Clayton McMillan (Ngāi te Rangi/Ngāi Tamawhariua/Te Rangihouhiri) said: “We are anticipating Ireland to come back strong on Tuesday, we have learnt a lot from that first match in Hamilton as I am sure they have too.”

With three debutants named in Tuesday’s match, McMillan is excited for Max Hicks, Josh Moorby and Caleb Delany to get the chance to pull on the Māori All Blacks jersey.

“The first match was really special, with nine debutants up against Ireland and this week the remaining three debutant players get that same opportunity to represent not only the team but their whānau and their iwi.”

“Last time the Māori All Blacks took the field at Sky Stadium it was amidst the Covid-19 outbreak with no crowds allowed at the match, McMillan said the team are excited to take the field and showcase Māori rugby in front of our Te Whanganui-a-Tara (Wellington) whānau.”