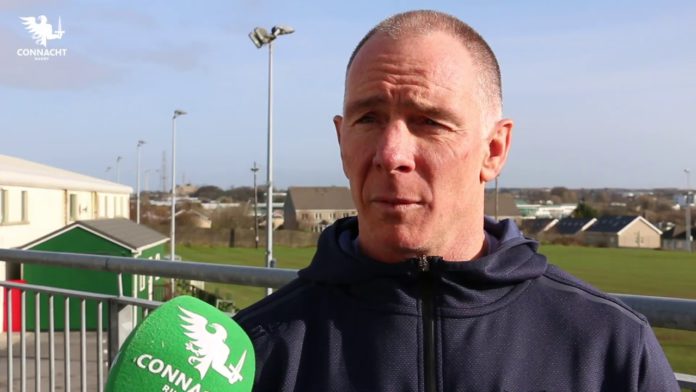 Tom Daly is one of a number of players Andy Friend has in the Connacht team for Fridays’s URC interpro against Ulster in Belfast (k/o 8.15pm).

Daly has missed the last three months with a knee injury he sustained against Ulster at the Aviva Stadium, but now makes a welcome return to inside-centre alongside Sammy Arnold.

The starting XV also includes Denis Buckley for the first time since June, Conor Fitzgerald and John Porch who were unavailable last week, and Cian Prendergast who has returned from a stint with Ireland as a development player.

In all there are 11 changes to the side that disappointingly lost to Glasgow last weekend. Buckley is named in a new-look tight five with Shane Delahunt at hooker and Tietie Tuimauga who’s named at tighthead, while Niall Murray and Oisín Dowling are paired together in the second row. Jarrad Butler captains the side from number 8, with Prendergast and Conor Oliver on the flanks.

In the backs, out-half Conor Fitzgerald is handed his first start of the season with Kieran Marmion alongside him, while a new-look back three features Porch at full-back with Alex Wootton and Peter Sullivan on the wings.

“We’ve had an honest week with difficult conversations about what happened last weekend. The performance wasn’t nearly good enough and we need to see a major improvement tomorrow against a strong Ulster team who are on a good run of form.

We’re welcoming back a number of players for various reasons which is always a plus, and we can take confidence from a good record up in Belfast the last few years.”