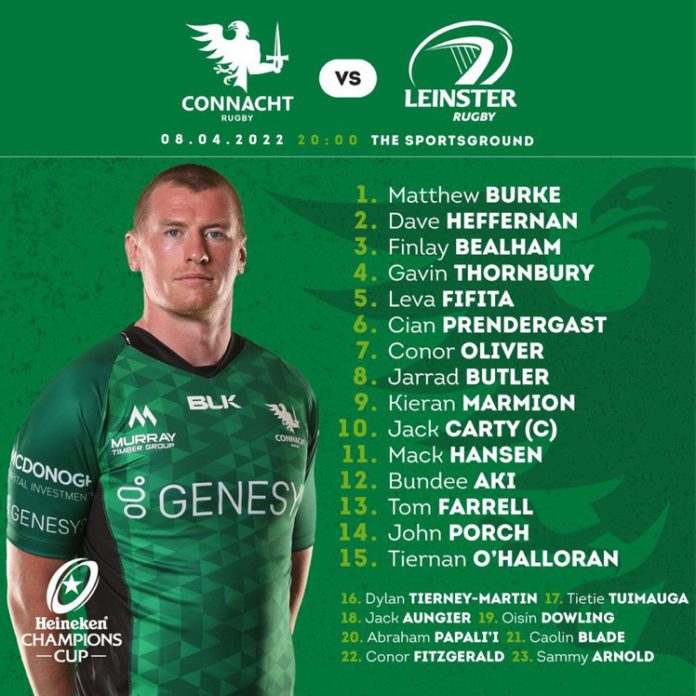 It’s Champions Cup rugby and we have the starting teams for Connacht v Leinster, TV Coverage on BT sports for the 8 pm kick-off.

A capacity crowd is expected to be in attendance for Connacht’s first appearance in the Champions Cup knockout stages, and Head Coach Andy Friend is able to welcome back a number of key players just in time for the occasion.

British & Irish Lion Bundee Aki returns for his first appearance since before the Six Nations, while there’s also a first start of the season for Gavin Thornbury after an impressive cameo off the bench last weekend following an 11 month absence.

The third and final change is the inclusion of club captain Jarrad Butler after missing the win over Benetton through injury.

He forms a back row with flankers Cian Prendergast and Conor Oliver, while Leva Fifita partners Thornbury. The front row of Matthew Burke, Dave Heffernan and Finlay Bealham is unchanged.

Match captain Jack Carty starts at 10 beside Kieran Marmion, while Aki will have Tom Farrell for company at outside centre. A back three of full-back Tiernan O’Halloran and wingers Mack Hansen and John Porch completes the side.

“There’s a huge sense of excitement among all the players and management for tomorrow night. These are the type of games you want to be involved in, and with a capacity crowd behind us it’s going to be a great occasion and one we firmly believe we can win.

We have over 45 players training between our Pros and integrated Academy players so that’s a great place to be at this stage of the season, and it’s given the coaches some headaches for our squad selection as well.”

Having integrated some of the returning internationals into the lineup for last weekend’s win at Thomond Park, Cullen has added captain Johnny Sexton into the matchday squad this week.

The St Mary’s College man will be joined in the half-backs by Luke McGrath, playing inside the same back line that started against Munster.

Hugo Keenan remains at full-back with Jimmy O’Brien, scorer of four tries in Leinster’s last European outing, and James Lowe on the wings.

In the pack, Cullen has made wholesale changes to the front five with Cian Healy, Dan Sheehan, Tadhg Furlong, Ross Molony and Josh Murphy coming in.

Behind them, the back row of Caelan Doris, Josh van der Flier and Jack Conan goes unchanged.

What Does Ireland Need To Do To Make The Next World Cup?