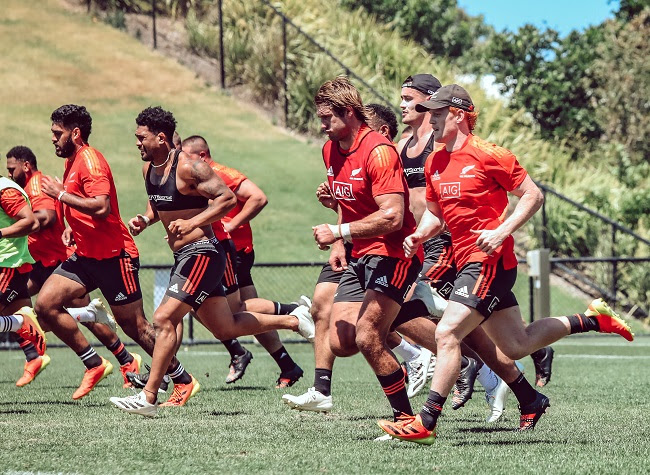 STATSports, the world’s leading company in GPS performance data, has today announced they will become the official high-performance supplier of the All Blacks, the most successful national men’s rugby team of all time.

STATSports will provide their cutting-edge technology to the All Blacks, All Blacks Sevens and Black Ferns Sevens on a long-term deal until 2024.

STATSports currently partner four of the top five teams in World Rugby men’s international rankings in South Africa, the All Blacks, England, and Ireland, and are known to millions of sports fans globally as the elite wearable technology that can now be bought by consumers who play sport at all levels.

England internationals Elliot Daly and Anthony Watson are long-standing STATSports ambassadors and have been involved in the development of the technology from a rugby standpoint.

The All Blacks join a rapidly-expanding network of top international sports teams from the New York Yankees to India cricket, as STATSports cements its global dominance working with over 500 elite organisations in 60 countries.

In football the technology is used daily by the best players in the world, including Cristiano Ronaldo, Megan Rapinoe, Lionel Messi, Alex Morgan, Mo Salah and Neymar, plus top European teams including Manchester United, Liverpool, Arsenal, Juventus and PSG. As well as the biggest international teams such as Brazil, England and Belgium.

STATSports performance trackers will be worn by the All Blacks, All Blacks Sevens and Black Ferns Sevens players during training and matches, allowing coaches to track over 200 metrics live including distance, speed, intensity and collisions throughout the games, leading to live decisions in training and on matchday based on the data. STATSports are peer reviewed as the most accurate and reliable data, so the All Blacks are working with the best.

The long-term goal is for STATSports and the All Blacks to make their technology available to all aspiring New Zealanders at every level of rugby, with the technology allowing New Zealand coaching staff the chance to track the player development at all ages.

“We’re looking forward to developing our relationship with STATSports and have been impressed with their technology – not least in recent years. We look forward to welcoming them to the All Blacks family and in turn we’re delighted to be part of their incredible network of top international sporting teams.”

“This is another great milestone in the sustained global expansion of the STATSports network. We’ve worked with rugby clients all over the world for several years but taking our relationship with the All Blacks to the next level as their official high performance partner benefits both parties. Their pedigree and success in world rugby across men’s and women’s teams is second to none. And with every new sports team we partner it enables us to cement and develop our technology and take all our athletes and sporting federations to the next level.”

Who are STATSports? STATSports are the world’s leading performance wearable technology, as used by the world’s top football clubs including Manchester United, Liverpool, Manchester City, Spurs, Juventus and PSG. The world’s best players use STATSports including Ronaldo, Messi and Mbappe, as well as investors Kane, Sterling, Maguire, Foden and Oxlade-Chamberlain.

STATSports also operate in a number of other sports including some of the biggest sporting names in the world, such as The All Blacks (today announced as their official high performance supplier), India Cricket and New York Yankees. STATSports operate in over 60 countries, with 500 of the world’s best sports teams.

STATSports GPS tracker tech can help improve user’s fitness and performance, alongside the best players in the world.

People would perhaps know the STATSports GPS tracker without even knowing what it is. The black ‘sports bra’ seen in training and underneath match day shirts holds the GPS tracker that feeds into the award winning, peer reviewed software – these stats help coaching teams make real-time decisions on the training, rest and recovery programs for their elite players to ensure they are always at the top of their physical performance and ready for game days.